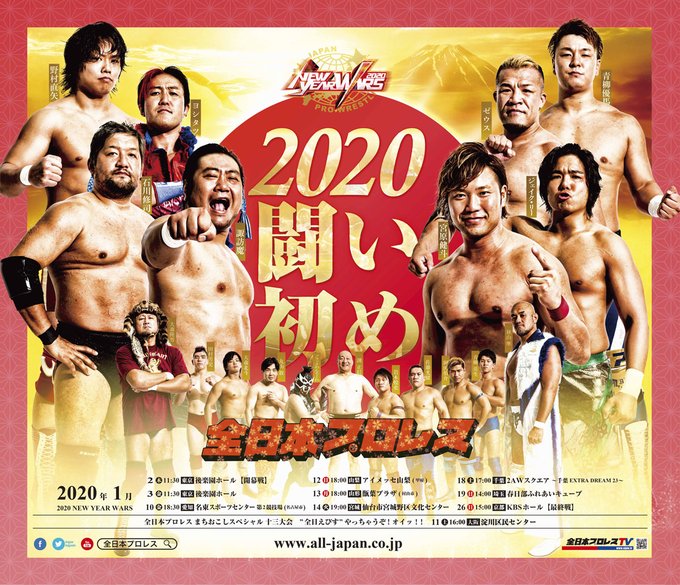 Thoughts:
All Japan kicked off the year on a high note with these four pulls, taken from their New Year Wars tour.

Night one had a great junior clash and it was really cool seeing Susumu work AND win a match in a All Japan ring. Fun fact but Yokosuka hasn't worked a match in AJPW since 2002 and it was in a contest featuring Magnum Tokyo.

The main event was also of note as the Violent Giants reclaimed the company's top prizes for tag teams after they legit knocked out Zeus. It was a fantastic, hard hitter with arguably the best team in Japan getting the nod but the finish was a bit hard to watch and I'm sure if I had been there live it would have been triggered my anxiety.

Over on night two, AJPW claimed a new Junior Heavyweight Champion. The pace was slower and the work more calculating than expected, with heavy limb work filling out the majority of the run as it built nicely to its conclusion. I love the outcome especially.

To close things out, Kento Miyahara once again successfully defended the Triple Crown against Jake Lee. Part of me wants to see him drop the prize this year as the company begins to elevate more of the roster but I'd be just as happy to see him run roughshod over everyone and keep the belt. The contest itself is another amazing display from the champ and honestly another awesome outing from Jake Lee, too. AJPW has a truly underrated roster right now. Make sure you see this if nothing else.

Four high quality outings, one an early MOTYC. Yea, just another sign that All Japan is going to have an awesome year! Check these out while we wait to see what they do next.
Red's Reviews Wrestling