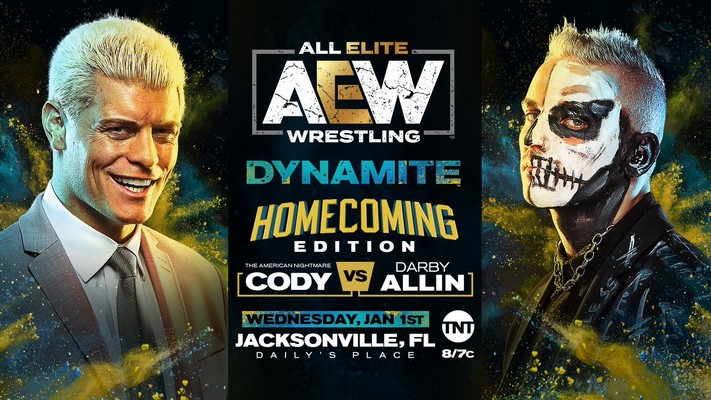 Thoughts:
This is a great way to bring in 2020. Last year was one of the best in terms of pro wrestling excellence, and I have no doubt that this one will hold a lot of weight, too. The arena here has quickly become one of my favorites, as I love the layout and general tone on display when AEW performs here.

Having Taz on commentary for the night was a nice bonus.

The opener was fantastic, and the exact way to kick off the year. I wouldn't have minded another draw, but this was more than fair and Darby again came off looking like a star. Outside of an iffy armbar transition, I have very little to nitpick. Even the heel teases from Allin were nice as were most of his technical, targeting tactics. The usage of Arn also felt like a true revival of the proper manager role. Go out of your way to watch this one.

Fun SCU promo and a setup from CD versus Sammy next week, which could be okay.

I thought the four-way was great, using every second well and full of drama and excitement. The women's division has really started to gel lately and this was a nice sign. Everyone came off looking well and I think it was a perfect follow up to the opener. Nyla loves tables. Riho will likely be selling it in her defense next week versus Kris.

Janela gets a ball-shot from Ford. She and Kip walk past the fallen heap.

The third match was a nice surprise as I expected a rather short one, but they broke that trend and Trent got to look strong in defeat versus the hot property in a fairly good contest. The angle after came off a tad flat for me, especially Mox's part but I feel he might have been legit hurt a tad off the piledriver and not in the best place to cut a killer promo response to a pre-recorded Jericho spot.

Sammy getting the win over Dustin was surprising, though done in a way that doesn't truly hurt Goldie, keeps the plot moving, and still gives Sammy a notable victory. The commercial cutting away from the PIP format for a minute was jarring and hurt the flow a tad, but it wasn't must-see either way despite being largely inoffensive at the same time.

I like how they're moving the Page/Private Party stuff over to Dynamite. They occasionally do that with BTE content, but they should likely ease into it with a bit more precision for those who aren't like me and don't watch the vlog.

MJF cut another great promo and the stips he gave to Cody were interesting choices to say the least. The lashes reminds me a lot of ECW, for hopefully obvious reasons, and I am eager to see where they go with this.

Now, the main event was noteworthy. The Elite spent much of 2019 building the roster around them while eating some big L's along the way. 2020 needs to be the year they officially cement their own position, though and I feel they did just that on this episode. Not only that, but the six-man itself was also just a high note cap to the evening. I am very curious what the plan for PAC in 2020 is and Page's commentary work was interesting, too. He played ignorant on next week's tag match alongside Omega, kind of mentioned that he tried to leave the group recently but it wasn't sticking, and continued his slow move to heel once more. I'm all for the long game, but hopefully they pull the trigger next week officially. Either way, I continue to love how the overall roster relates to each other and how multiple narratives take place with the bigger names at the same time.

This was one of the best episodes of Dynamite they've ran and a strong way to start the year and they largely cut to the chase and played the hits. Quality wrestling and smart booking calls. It just felt special.