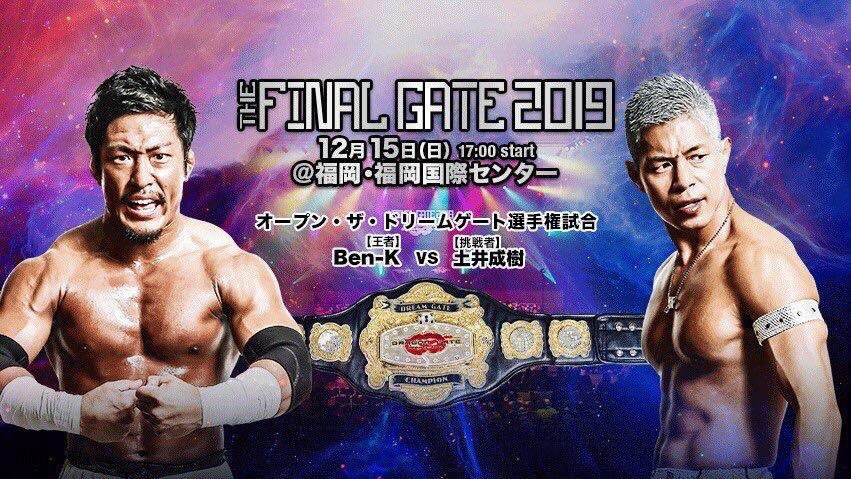 Thoughts:
The last big Dragon Gate show of the year has arrived and it's a good time to reflect on just how awesome the promotion has been this year. Major moments, sincere surprises, great action, and excellent story work alongside the rise of the future stars. If you skipped out on them this year, for whatever reason, I strongly suggest fixing that mistake in 2020.

So, let's take a look at the three pulls, starting with Ishida's defense of the secondary singles championship. It's worth noting that on paper, this is the type of contest I want to see this belt contested over. The Brave Gate strap should showcase youth while preparing them for bigger roles down the line. That's what this was, and I'd like to take two seconds to applaud the move of putting the champ in the fed's heel unit, R.E.D. as I think it'll be beneficial to him as the current story progresses. The defense itself was borderline great, though the finish took away a tad. That's the only issue with Dragon Gate heel matches and it did pop up here.

Next up, more R.E.D. championship action, this time as Big R and Eita put up their tag belts. They went for chaotic fun with a built up shock finish section here. Few promotions can pull off this level of bullshit and make it entertaining, but here we are and it worked for the story. R.E.D.'s actions essentially cost them this one, as they had control for nearly every moment until the flash pin ended it, giving Tribe Vanguard the victory. Good stuff, in all, but it obviously could have been better ran clean. Big R will hopefully finally get a solid push in 2020 now.

The main event was fantastic. Ben-K's run was rather important, pushing him to the main event with a huge win that was built up very well against PAC. He's solidified as a major player moving forward which is what they needed to do. They apparently decided, though, that it was time to move forward in a different direction to close the year. Most expected another victory for Ben-K, but instead we got a feel good moment for Doi. The Ben-K test was a success and he can be a conceivable challenger at any time now, so that's great and Doi should be awesome as champ again.

Dragon Gate's last big show of the year was another enjoyable experience from the promotion and a reset of sorts, too. Check out the Brave Gate and Dream Gate matches if you missed them.
Red's Reviews Wrestling