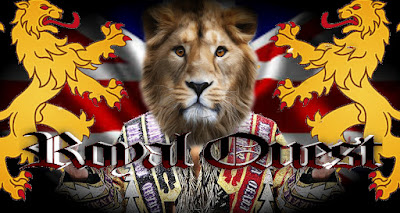 Thoughts:
Time to catch up on the true kings of professional wrestling, starting with the Royal Quest event. And yes...I did make the image above out of boredom. Note that I am moving at the end of the week so the blog will go silent for a few days. Just a heads up.

The first pull saw the birds taking out Bullet Club in a great contest. I'd like to see Eagles and Ospreay team more often, but only if it doesn't hold back Ospreay. I mean, this both tag divisions need a change up, but Will has been on fire in solo action and if he is put in too many tag team contest it could slow that down. On the other hand, it could be awesome so fuck it I'm happy either way.

Up next, we get another nice change up. I have been wanting Aussie Open to join New Japan full time for a while now and I hope this gets them closer to that. GOD stepped up and both teams looked good here. Very enjoyable defense.

In the three spot, KENTA challenged Ishii for the NEVER strap. This was far different than expected and, even without the interference, it felt a bit...off. Sadly, this is a skippable affair.

The semi featured the top prize from RevPro on the line and a surprise outcome. I love Sabreism, but Tana winning was a cool sight and the contest was great. Watch that one.

Main event time. I love the story here, with Minoru being jaded that he was left off of the G1 so he wanted to, and got a chance to, murder Okada here instead of WK. Now, there was no real chance at a title change and Okada is guaranteed to walk into the 2020 shows as champ, but that didn't lessen the quality of the defense. It wasn't a MOTYC level bout in my opinion, but it was fantastic nonetheless. I would like to add that the crowd was rather fun for this show.

In all, Royal Quest provided a decent amount of entertainment as most New Japan shows do. If you missed it, consider checking some of these out.
Red's Reviews Wrestling