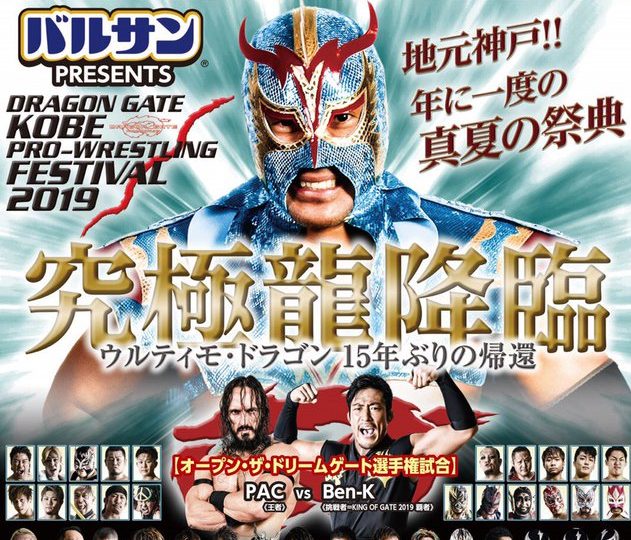 Dragon Gate's biggest show of the year, streaming on their sub service here, is nearing. This Sunday, the future of one of the best promotions in the world will be highlighted and some major moves are expected. Let's dig in and take a look.

CARD & PREDICTIONS
-K-Ness, Super Shisa, Shachihoko Machine, Problem Dragon, Draztick Boy vs Kenichiro Arai, Jason Lee, Okuda Keisuke, Dragon Dia, Jimmy
This is one of those "get everybody on the card" kind of matches, but dear god does it intrigue me. There might be a bit too much going on here but, if the layout is well done, we could be looking at one of the best openers of the year. I have no idea who's winning but I'll say Super Shisa's crew gets it done.

-BXB, Kagetora, Santa Maria vs Horiguchi, Punch, YASSHI vs Hyo, Kota, Yuki
Hulk's back Tribe Vanguard are fully looking to get back on track here. I'm not expecting old BxB back, especially after breaking his neck, but this should be largely about him and I'm excited to see how it pans out.
-Saito and Stalker vs Choi Hong Man
Remember that comedy versus mma style match on the DDT card a few days ago? This is like that but the Dragon Gate version. I honestly have no interest in this one so let's move along.

-Kzy vs Shun Skywalker
Kzy has become one of the hardest working guys on the roster. Skywalker is one of the brightest young talents in Dragon Gate. While the main event should be a story of the future of the company, consider this an appetizer. This could steal the show and I sincerely hope Skywalker walks away with the win.

-Open the Triangle Gate Titles: Kazma, Yoshida, Kanda(c) vs Strong Machines
I think the Strong Machine trio are a decent addition to the roster but I'm not sold on them enough that I like this little push they're seeing. This match likely has a three star roof with the "new" toys winning gold since they really want J to get a nice spot moving forward and this is a natural next step.

-Open the Brave Gate Title: Susumu(c) vs Flamita
Flamita can be great at times and I'm hoping he steps up here considering the platform. Susumu is one of the best roster members so it should be enjoyable at the very least. That said, they do mainly use Flamita is spot fill matches and to put over talents as needed and this looks to be the same thing here.

-Ultimo Dragon, Dragon Kid, Yoshino vs Mochizuki, Sugawara, Kondo
This is a huge match, celebrating twenty years of Dragon Gate. The fact that Ultimo Dragon is involved makes this bigger than huge, really. Anyway, outside of being just a novelty contest, this has a lot of real potential depending on the layout and time given. Ultimo's group will win in what I'm hoping turns out to be a great six-man.

-Open the Twin Gate Titles: YAMATO, KAI(c) vs Big R, Eita vs Ishida, Doi
KAI has been one of the biggest surprises this year, in my opinion, and his team with YAMATO has been better than I ever expected. Mix in the very talented RED reps and Ishida and Doi and you have a promising three-way tag clash. I have no gauge for who's walking away with gold, but I'd like to see Eita and Big R pick up some extra mass here since...

-Open the Dream Gate Title: PAC(c) vs Ben-K
The main event this year is one of the most exciting Kobe main events in recent memory! Yea, Ben-K is being set up as the future of the company and the road has taken us to this point. It's time to see PAC fall. This has all the makings to be a MOTYC and one of the biggest success stories they've pulled off ever. The fact that they've crafted this run to the top so perfectly deserves applause and in a few days, we get to witness the payoff. Also, expect PAC to finally start working AEW shows after this one (maybe a run in at All Out).

Closing Thoughts
Kobe this year has enough going for it that I can feel confident in my predictions that it'll be a truly great show. If you've held off on the promotion or just left for a while, consider jumping back in here!
Red's Reviews Wrestling