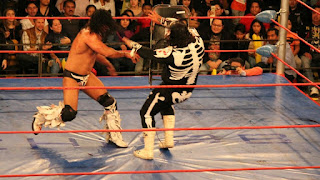 5.Impact Wrestling moving to a much smaller network in a death slot and the station basically not seeming to even care enough to even promote it.

3.Strong/Swagger winning the Lucha Underground Championship to end the season/series

1.CMLL not booking Rush/Park mask vs hair match
-One of the biggest feuds in lucha libre is between LA Park and Rush. These two bring out the absolute best in each other and have numerous matches against each other that hit MOTY levels. As the big anniversary show neared months ago, it seemed we'd finally be getting the big mask vs hair apuesta that we all wanted. Instead, the plan changed at the last second and we were given a tag match featuring Rush teaming with Barbaro to take on Volador and Taven. It was even more frustrating knowing that Park was on the same card and match lower. The show ended up being ok, but this one really disappointed me more than anything else wrestling related in 2018.