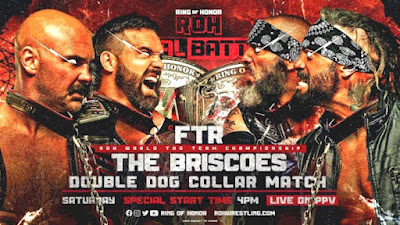 The final Ring of Honor event of 2022 and the latest under the leadership of Tony Khan. The way the brand has been utilized since Tony bought it has received mixed reactions and I actually agree with some of the more constructive of criticisms that I've seen thrown out. I know Ring of Honor is Tony's new toy, but seeing The Kingdom, for example, falling on the preshow to Top Flight is a bit funny a sight. The way they handled Deonna was even worse.

LFI lost the first match of the main card after Fox got the winning pin on a fucked finish. This one could have been awesome but sadly didn't hit as hard as expected and the closing moments really did suck the air out of the room a bit, too.

The heel unit attacked after.

Athena's recent revival into her more aggressive, complete form following her "controversial" Toronto outing has been a treat to watch and she was rewarded in our next match for her efforts. The fans got a hometown victory, too. The right winner and a fairly good match.

History was at play a bit next with STP and Swerve in Our Glory in tag team action. JD was there to eat a pin and get a tiny bit of a spotlight and he largely did okay with the spot despite clearly being out of his league. It was a bit funny seeing Swerve and Lee even working this match at all and the finish actually did little for me, to be fair.

I get what they were going for, but the outcome saw Lee picking up the win after it had just become a handicap match and it just felt a bit wrong.

Ring of Honor used to feed their crew to New Japan names and now Tony is giving rubs to names that are more AEW leaning. It's his business and I get it to a degree, but it's perhaps fair for old ROH diehards to dislike some of these small things and to see them turning into an avalanche.

Dalton and his boys lost in a good, but largely forgettable, six-man next to Cage and crew. If this equals something better for Castle, I am in favor of the move. If it's just to give The Embassy some gold so that their midcard heel unit drama on AEW television is a bit more shiny and nothing else, than I really don't care one way or the other.

Top Flight backstage after six-man bragged about besting The Kingdom. 2point0 interrupted and the two sides would brawl, eventually out onto the ramp. Top Flight would seemingly get the upper hand before being taken back by security, allowing for the JAS boys to cut a promo in favor of the Pure and World defenses coming up.

Claudio and Hager as the Hat Trick...

Anyway, the Pure match I mentioned a moment ago saw Yuta dethrone Red Death and I really loved the intensity as well as the way both used the rules in a way that both exposed the rules a bit and embraced their rivalry a lot. The curbstomp shout out to Super Dragon from the PWG World Champ was a nice touch, too.

Seven watched on at ringside.

Great stuff. The division is so fucking fun and continues to be one of the best things about the Ring of Honor brand since they revived it (and Tony kept it).

Next up, a five star classic and a match so bloody that you could literally smell the iron through the screen. They really should have made a damn sword. Even the damn ref bled. The simple truth here is that this was a showcase of what tag team wrestling can be in the modern age. Respect, brutal violence, and a perfect blend of abilities with storytelling drama all culminated here into a perfect 20+minute war.

Easily one of the best things I've ever seen in pro-wrestling and one of my favorite tag team matches of all time!

I wonder if the stumbling ROH television deal that was eventually announced had anything to do with Tony failing to get something better because he didn't want to move on from The Briscoes? They could've really used all of the momentum from this show to spark something decent for the next chapter of the brand but instead it all kind of fell flat.

At least Dem Boys aren't getting the treatment many other former Ring of Honor mainstays are but it's too bad that someone saying something really fucking stupid years ago is enough to scare networks that otherwise are fine with literal murderers, sex criminals, and other walking trash bags.

That match should've main evented, by the way.

After, the ass boys sadly appeared. It was short, at least.

Samoa Joe and Juice had a TV Title match as the Final Battle semi-main and I admittedly have no idea why it was even booked. I dig Juice and am enjoying most of Joe's work of late, but Tony really loves just throwing things at a wall sometimes and seeing what sticks.

Maybe there was a segment that lasted ten seconds or something on YouTube that I had missed that explained it...

Apparently the situation is that Juice said he wants the belt and his time in New Japan was enough.

That certainly feels a lot like old Ring of Honor, to be fair.

The King of Television and Bullet Club's charismatic midcarder were in a tough spot but, to their credit, they put in for ten and change of solid entertainment. It is always nice seeing Joe in an Ring of Honor ring, too. The big dude essentially acted like a beast, Juice got some shit in for a spark or two, and the champ eventually won the throwaway.

I bet this would've landed a bit better as a main event of ROH TV...

We closed with Claudio taking The Ocho from Y2J. Honestly, at the top of the current Ring of Honor product you are still getting names that represent what Ring of Honor is and was getting nods. That's a plus and largely counters most of the criticisms. I also honestly do enjoy when they actually make effort to showcase the red and black on AEW television more often than not. In short, I've bitched a bit about a bit here but I largely am enjoying the product despite some flaws.

That last bit really does well to summarize Final Battle.

Anyway, this was a great contest though admittedly a different format would've been better. It also shouldn't have closed the show, as suggested before, but it is what it is. The finish was fun, in my opinion.

This was really a fun show and featured a far better runtime than most of the bloated (though great) AEW special events. The build wasn't always there, but the performers really worked hard throughout and most of it landed well. I know some old ROH fans are still polarized by Tony's vision for the brand, but there's enough good far outweighing any "bad" and that ensures that I'll keep tuning in at the very least.

If you missed the show, it's really worth considering. Either way, thank you for checking in and I hope this edition had some worth to you!