With the news of Vince's large shadow returning to the industry, several talents have privately expressed an unease with the new uncertainty. Yesterday afternoon, an "all hands on deck" meeting occurred to discuss the old, alleged sex pest's return to the company's Board of Directors.

The "freelancer" talent were not included.

It did little to help.

It didn't last long but one major thing of note is that it was said no changes to responsibilities would occur for HHH, Steph, and Nick Khan. Instead, the change was promoted as being a good thing that would help with rights deals that loom on the horizon. They also once again floated the idea that WWE could be sold to the right bidder or even moved into private territory if either became the best option.

I wonder if it'll be corrupt Comcast or Saudi's blood money that wins out...

It's selling for sure, if we're being honest and we all basically know the real reason the dude is back, wouldn't you agree!? He's supposedly even holding the company hostage essentially by saying he insists on being reinstated as Chairman or else he won't allow for any renewals of TV deals.

They tried hard here to increase morale and erase tensions, supposedly, but it's hard to see this as landing very well, especially considering the choice to decline questions in post. Anything else I hear will, as usual, be sprinkled throughout future editions or will get a bigger spotlight if it seems like the right call.

Speaking of unease though, you absolutely have to ask yourself right about now how Andrade is handling the news. I mean, the dude supposedly pulled a lot of bullshit in an attempt to run back to Trips and is now watching his greener pastures turning shades of brown. Don't think for one second that the promise of no change will remain true. To a lesser extent, I also wonder how Dragon Lee is feeling right about now. At least Almas' situation is funny, I suppose. 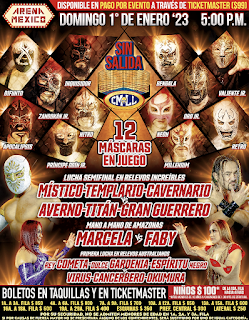 I'll use that segue to close this set out with a look at two matches from CMLL's latest Sin Salida special event. For those of you reading that are trying to use a translator service right now, it means "no escape" and the main event saw 12 low level luchadores in a steel cage apuesta match.

Before we talk about that, though, I want to spotlight a different match.

Let me preface this by saying that CMLL's women's division is not a place I tend to frequent very often. It's full of politics and the matches sadly aren't usually that good. This was a huge exception, though, as Marcela and Faby ran wild for 20-minutes and put in for the first high quality lucha libre contest of the year! Very good intensity levels in this one and an easy recommendation to all.

Lastly, returning to that cage match I referenced before, we have a massive clusterfuck lucha libre cagematch. Funny enough, these are also usually the drizzling shits. Instead, I'd argue that this was actually pretty decent and I could tell that all 12 dudes were clearly trying hard to make the best of the chance provided to them.

Basically none of these dudes will event get to close out a big CMLL show ever again, if we're being honest. Smart workers would use that and try to spotlight themselves as much as possible. Since that's kind of what we got, this ended up actually being a good outing (though admittedly below recommendation levels) and I applaud the efforts of all involved.

Click the poster above if you really want to watch the highlights.

That'll be all from me this time. I know this edition was very different from past Digest entries, but we try to keep things less stiff around here and the story at the top was far too big for me to ignore.