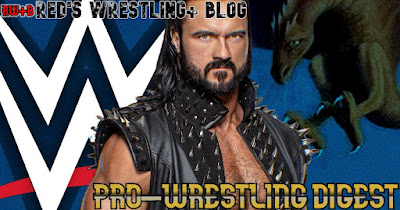 This set of WWE pulls start with Money in the Bank and get us right through July. Hopefully I can get back away from brand specific content digests soon but for now, this just makes sense.

The women's Money in the Bank ladder match this year was good while simultaneously being very rough at its core. To be fair, the botches and shakiness worked in a way, making this feel more raw and unpolished and therefore more painful and legit as a result. Closer to something I'd expect on the indies, actually. Liv took the briefcase and started one of the major stories of the night.

(Later, she'd cash in but I skipped that section of the event)

Lashley and Vince's favorite generic Create-a-Wrestler put in for a title defense that surpassed expectations next. While I agree that both men, especially the challenger, are capable of truly enjoyable content, I still had low expectations walking in. Those low expectations allowed for this to be a surprising treat, at least. Bobby took the belt here.

Up next, tag gold on the line. One of WWE's many issues is their reliance on running things back over and over and over again and this match was already their ninth encounter as far as I can tell. Still, they've been producing quality content together at least and I appreciate good tag team wrestling when I can get it. This was better than just good, though. This was a high quality, fantastic contest and yet another bit of proof that Jey and Jimmy are far better workers than most are willing to admit. Check this one out, even if you're usually anti-E.

The men's ladder match saw Theory get added at the start and then the expected chaos to follow. It suffered a bit from the feeling that it was just another edition of an ongoing series, like I feared. The way WWE does things basically makes matches like these a wrestling version of whatever game series that's released yearly that you'd like to bring up here. Perhaps Call of Duty not that long ago? Anyway, it was fairly good for what it was but indeed suffered because of the cut/paste situation. If you wanna see a few big spots and some teases before seeing a dude that just lost earlier in the night come in and win feel free to watch it. I cannot recommend it for anyone else and even those that do watch it will likely forget it shortly after watching it.

Becky and Asuka's no holds barred main event was a very good hardcore match building off of their feud and paying off nicely. Solid intensity level, a good layout, and some nice spots. Very good overall.

Grayson Waller failed to dethrone Hayes and the champ retained the North American strap on this year's edition of the Great American Bash. This one was an athletic, 12-minute title match on TV and they used their time pretty well. You wont be wowed or anything, but I think it served as a nice example of what NXT 2.0 was trying to be and I think both dudes are pretty solid, especially the champ.

Breakker and Grimes is a good follow up. I've been a big fan of Carolina's favorite caveman for years now, especially thanks to that amazing CWF Mid-Atlantic reign he had, but he's destined to be NXT's Dolph Ziggler. He at least worked hard here and he and Breakker put in for a good main event even with the anti-climatic finish. Like the previous match, you don't have to necessarily consider it required viewing but it's entertaining and a nice enough showcase of talent and brand and honestly pretty good overall.

Devlin attacked after but Breakker mistimed things because he's still greener than I think most are willing to admit.

Next, Bate and his mustached partner with the NXT UK strap on the line. If you're wondering, I am watching this via tape date not air date. Both worked hard to give us a dramatic, well worked contest. While I am aware that Bate's reign was short thanks to the changes taking place with the UK brand, I still have to say that in a vacuum this just felt important and elevated a belt that's now dead. I am hopeful that this wing of WWE doesn't take a massive dip on the rebrand because it's been far better than most realize. I suppose that's something that connects the first two pulls.

Paul Heyman had the stick in our first televised segment of the set and he put over Brock to sell their Summerslam battle. Theory and Alpha Academy were then fucked up for their trouble.

Rey Mysterio took on Finn in our 9th. I dig Balor getting a new unit to lead and am hopeful this translates to something better for the dude. It's also always nice seeing Rey get a chance to show how ageless he is. A nice enough TV match.

Lashley and Riddle versus Seth and Theory was good, circus shit with a nicely paced endstretch that saw the faces get the W. Dolph was involved and got a shot on Austin in post, too. For a TV tag match, this was more than serviceable.

Hey look, the Street Profits and Usos brawled on SD. JJ is also announced as a special guest ref because...yeah...

Judgement Day beat the fuck out of Rey and demanded his son join their unit... also because...reasons.

The above video saw Theory using the briefcase to lay the smackdown before Brock came out to murder him. Fuck everything because this was fun in a popcorn kind of way.

Moving along, we had Reigns and crew against Riddle and the Street Profits. This was simply a very good six-man match that saw everyone deliver for some quality TV entertainment. Works well as a sequel to the Money in the Bank match, too.

My last NXT pull for now was an 8-man main event. While the two above title matches from the brand served as a great showcase for NXT 2.0, this one did a good job of showing a big chunk of the roster and general vibe. Not must-see, but enjoyable enough for what it was.

Here's a fun preview for Summerslam! Paul spoke and Theory got destroyed by Brock and Drew.

McIntyre and Sheamus took a terribly named gimmick and made it into a fantastic, violent battle in out next pull. Sure, it was a circus act but they ran wild with it people and that deserves some love. Exactly the type of match I'd love to see more of and the type of thing that'd make me watch more regularly.

Belair and Becky continued their rivalry next in a great contest on a huge stage, with both building off of the foundation they'd set to deliver nicely. Bianca winning was the right choice and I appreciate the way this built up as it went.

Post, Bayley, Io, and Kai came out for a face off.

Roman and Brock's latest war was a last man standing clash and it was pure fucking fun right from the entrances. A demolition derby disguised as a wrestling match, Brock vs Roman VI was their best outing thus far and I had a blast. Check out this insane, highly enjoyable overbooked mess of a MOTYC soon if you somehow missed it.

That's how you end a digest, folks! This basically was a set that consisted of Vince's last days in charge, officially depending on who you talk to, as well as the official start to Hunter's day on the throne. I strongly recommend the Usos/Street Profits defense, the UK Championship contest, and the last man standing battle. Everything else is up to you.

Thanks, as always, for reading. August should be up soon.