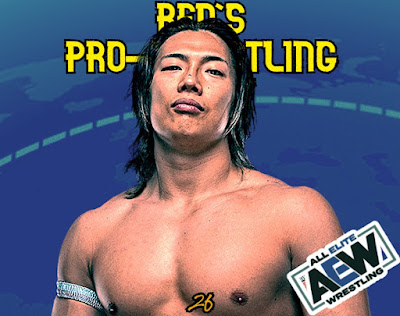 Following up from Digest #25's content, I have a second round of AEW to take in. I'll be using the AEW YouTube channel for this edition, so matches will be rated based off of what is presented there versus what aired on television. This one will get me through Fyter Fest. Part three will include everything else up to current programming for both AEW and Ring of Honor!

Starting with Royal Rumb...Rampage, we have Brody getting a huge spotlight moment. The finish was an especially rewarding visual. Overall, this was good shit.

I also went ahead and pulled the eliminator match, because it seemed fun. I was right. They held a nice pace and the action was pretty tight. Borderline great tag team action.

We head to Roc City next. I was supposed to be at this one. Shit happens.

Wardlow won the hot potato. It seems like the right choice I suppose, and I dig the dude's largely organic growth, but the match didn't do enough for me to care much about this outside of the outcome.

Rush and Penta had a singles match next. We had a shit finish and it wasn't as smooth as expected, but I enjoyed this one. I sincerely love seeing Rush in AEW and am eager to see what they do with it.

Mox defended his interim strap against Brody in the main event of Dynamite 144. I dig the way they've made King a clear threat so quickly, even in defeat. He'll serve nicely as a throwaway defense from time to time and is truly a hard working son of a bitch so I'm all for the mini-push he got here. I also dig Mox as a fighting interim champ. This was a fierce brawl and a fantastic treat as well.

That was fun, folks.

I watched an spot that served as a set up for a three team title match with Team Taz, Bucks, and SIOG. It was fine. Hubris.

Kingston was in the ring with Tony next. Jericho interrupted with footage from backstage where Conti slammed Ruby's arm in a car door. Well done.

The next segment I checked out saw Dark Order come out and remind fans, in Brodie's hometown, that they aren't going anywhere. QT came out to threaten -1 but Page and Dark Order fucked him up. Crowd pleasing entertainment.

The kid promised to pin him when he was older. I look forward to seeing that one day.

Orange made Nese seem like he was better than he is in that show's closer. The latter is a good worker and has been for years, but has the energy of a dead fish. Good nearfalls and tight action elevated it well past expectation levels, even with the circus act stuff.

Kingston and Takeshita's Rampage battle built nicely and ended triumphantly. It was as good as I had hoped, and those were big expectations, and something well worth watching.

Dark featured PAC's first defense of his new prize. I really hope he can find his way to Dragongate before dropping the strap. I also am thankful that they are airing these matches on Dark and I actually still think they should have a show, perhaps digest form like W-1's old show, that focuses on international matches related to AEW in some form.

Anyway, The Bastard and Umino used the circumstances of the platform to really take their time and put in for a well put together, fantastic contest. They told a story through drama and put in for a nice display of fighting spirit.

Next along my ride through the channel, I landed on the three-way tag title match featuring the Bucks, Team Taz, and Swerve in Our Glory. I can only imagine the backstage workshop for this one was fun as hell to have been involved in. The three duos stepped up to put in for a strong bout of dynamic storytelling mixed alongside high quality in-ring athleticism. The dramatic nearfalls and a pace that allowed for organic growth melded perfectly, adding up to a televised MOTYC that felt important in its delivery and generally like an exciting swerve thanks to the outcome.

Mox then faced Takeshita after. I love how much love Takeshita has gotten from the AEW crowd and it's because of two things.

Here, we had yet another televised MOTYC, thanks to some very, very hard work from both. Takeshita took the opportunity and Mox was happy to match the energy. I fucking loved this and strongly recommend fans of the art that is professional wrestling to watch it as soon as possible.

Jericho had the mic in the next pull, pushing forward the Y2J/Kingston program in further upward in a positive direction. I look forward to seeing that barbed wire match up ahead. Eddie did in one double that Chris did with five.

I went ahead and watched Wardlow's defense of his new prize against Orange. It was borderline great and felt like a more than competent title defense that made both look good regardless of the result.

Next, the last pull from night one of the four night event and our last pull of this set as well, saw Christian on the mic getting some cheap heat. Luchasaurus bested GG quickly and then destroyed both of the Varsity boys after. The drama, folks! This was a statement match and part of one of the biggest stories in wrestling right now considering the other major US thing of note currently is that HHH is supposedly at the helm now.

Expect part three of the set, catching up on AEW, to come soon. I also have some fun news to announce. As some of my more frequent visitors likely know, I've attempted in the past to bring on a good friend of mine, retired pro wrestler, Steve Stone. We've had a few ideas in how we'd do such a thing but it never panned out. That's finally changed and we're launching the Take it Home with Stone & Red podcast. I am hopeful that you'll enjoy the show and am thankful for anyone that checks it out, along with the official RW+B Podcast series while they are at it.