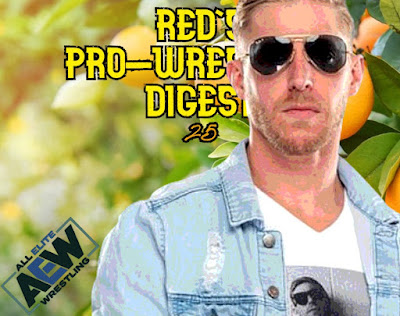 Ladies, gentlemen, and nonbinaries, I am back once more. My father in law made a personal choice, one based around lies that he had fallen for, and that were promoted by a large group of grifters, and as a result he didn't get the roughly 20 extra years, give or take, that he should have. No, instead the man that helped me, my wife, and my kids (and dogs) when we were in one of the worst places of our lives following a terrible car accident that we had suffered is now gone because of bullshit propaganda.

I'd be lying if I said I was okay, but I've lost a lot of people I care about and you learn that it never fully heals but you've got to push on anyway.

So, with that said, in an attempt to explain to frequent visitors why I've been gone so long this time and why I am just now getting to this content, let us dig right in.

Actually, a quick side note just to say that I do plan on getting back to that throwback goodness that I featured in #24 of the digest (especially because the internet situation out here isn't getting much better).

First up, we have Forbidden Door build up.

Okada debuted at the end of Page vs Silas, which is a match that I did not watch in full to be clear. Cole and White were involved, too. This to set up a four-way at FD. It was an interesting way to get there and there were some question marks along the way, too. Still, it set up a killer match so...whatever.

Tanahashi and Mox bested Archer and Jericho in a contest I only caught a bit of, thanks to the AEW YouTube channel. The chaos after to build Forbidden Door as well as Blood & Guts was appreciated.

Moving along, we had some sad news with Bryan announcing that he had to miss the show but that he had a replacement that would make up for it (it did). Acceptable.

CHAOS and United Empire next had a very good contest that saw Orange best Kyle, who has been a fall guy in his appearances. Cobb and Khan showed up as did FTR with the save.

Storm and Shafir had a match that happened. Some drama with Nia occurred. I didn't really find myself caring much about this and felt that it was a disappointment overall.

Black and Penta's All-Atlantic qualifier was good shit, too. It's actually embedded above, if you're interested. This one ended with a last moment spotlight on the title match ahead, with PAC and Miro making statements.

Last, before the big crossover show, we were given Andrade versus Fenix on Rampage followed by Cobb and Wheeler in singles action.

The lucha spotlight was an exciting spotfest and featured a bit of circus act style shit near the end. Luckily it also had Rush's debut, though. I'm all for that. Great stuff overall and an important debut.

Penta ran out for a save to end this one.

Chaos continued next in a singles match featuring Cobb and Cash. What I saw was just the closing seconds, but it was nice seeing Jeff getting a W on US television. Speaking of chaos, though, and we had a huge brawl after that put in for one last shot at building up the PPV.

Next, Forbidden Door itself, a super show put on jointly with New Japan and AEW.

Holy shit this was an all-time great show, people!

The Buy-In featured four matches that all largely overdelivered.

The Factory and Bishamon was good, the big boy brawl worked well enough, Swerve in our Glory's match with Suzuki-gun was a quality throwaway, and LA Dojo's match against Caster and the Ass Boys was fine enough.

The main card was even better, though, as it should be.

Suzuki and the JAS had a killer multiman against Shota, Yuta, and Kingston.

The ROH/IWGP Tag Team Championship three-way was even better, by a hair, and one hell of a thrillride.

Next, we saw yet another must-see match, this one with the random All-Atlantic strap on the line in a four-way decision battle. Connors stepped up in his role and Pac, Black, and Miro ruled, too.

Dudes with Attitudes took on Bullet Club in a six-man that was the definition of overdelivering. Phantasmo and the Bucks worked as hard as always and I absolutely need more of this new version of DwA as soon as humanly possible.

JAS and Shota drama was included there.

Next, Thunder and Storm had a good title match but one that failed to live up to the hype and the general quality set by the rest of the show. Disappointing.

Orange and Ospreay had a MOTYC with the United States belt on the line in the 6 spot. For many, this was a show stealer and served as further proof that Cassidy is far from simply a comedic player. Of course, having been a fan of the dude since his CHIKARA days, I already knew this. Incredible athleticism.

Claudio made his debut in AEW next, serving as Bryan's replacement, and put in for a fantastic technical battle of wills against Tech Wizard Sabre. A treat, for sure, and a great way to keep fans from feeling too let down by the injury.

White, Okada, Cole, and Page put in for a major showcase with the IWGP World Heavyweight Championship on the line next. The build up was certainly lacking but the payoff worthy of the names involved. Yet again, another fantastic addition to a truly awesome evening of wrestling.

The show closed with Tanahashi and Mox in singles action, the winner set to be the interim AEW World Champion. While this show felt slightly cursed heading in and I personally had fears that it wouldn't live up to the quality seemingly promised on paper, I'd argue that this worked pretty damn well as an endcap to the evening. Once more, a fantastic contest that surpassed four stars (in my opinion), even with the predicable outcome becoming reality.

Props to literally everyone that worked this show. I sincerely consider it to be one of the best overall events I have ever witnessed. Despite it feeling exhausting, in a good way, to witness, I know that I will be returning to it often.

Next, the Blood & Guts special edition of Dynamite, this one on the 143rd edition of the ongoing series. Somehow they even followed up on the brilliance of Forbidden Door.

The first half of the episode featured four matches, two of which were squashes (but were attached to broader storytelling spots).

Ethan Page got in a good one against Orange Cassidy but inevitably ate the L. Dan Lambert was far too active in this one, but I enjoyed it for what it was overall.

Christian came out to continue getting some cheap heat in his ongoing program with Jungle Boy, then presented a black clad Luchasaurus. The dinosaur then ate Serpentico.

Danhausen brought in FTR and bested Max and the Gunn Club. Entertaining, but nothing too special. The other half of The Acclaimed revealed he was fine near the end, which was circus act in presentation, and some friendly fire was accidently exchanged.

After, Billy sided against his own sons when drama began to spark up. Wrestling is murder soap opera, people!

Oh, also Jade retained in an easy one with Grey. Kris and Athena tried to attack after when called out but the heels took over, with some help from Grey. It was all okay.

Sky and Wardlow also had an exchange of words, Lethal called out Joe, and the lonely Bucks set up an eliminator match against Goto and Yoshi. All neutral to good territory stuff, basically across the entire first half.

The second half featured a bit of build but the bulk was the Blood and Guts match itself.

The good news is that it was a fantastic match that took the WarGames (and B&G) lineage and did it justice once more, thanks to a lot of hard work. The general build over the past months to this point were largely well done, at times being sincerely spectacular, and this payoff simply felt like...well, a payoff. I applaud all involved.

In all, this was a smart episode of professional wrestling and one that went down super easy.

And, with that, I close out this edition of the Pro-Wrestling Digest. I'll be posting part two ASAP and I, as always, appreciate anyone that is visiting and reading my ramblings and ratings.