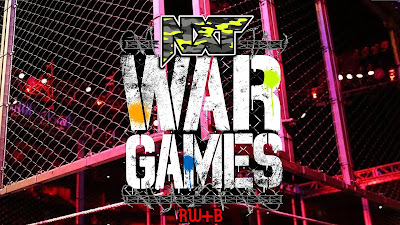 This one was a real start of a new era. NXT started as a cheap reality show. Then it was a developmental show. Next, a super indie fed that aired each week. Against AEW, Vince threw it to the wolves and changed the tone. It was still good, but different for sure and less than what it was before. With 2.0, NXT is a brand new beast once again and it feels like the biggest move overall since shifting away from the original concept.

I'm clearly not the main demographic for this show and I've made that clear recently. And honestly, that's okay. As long as the wrestling is worth seeing, I'll come back occasionally for some pulls.

Anyway, this one started with the women's match. I really love this gimmick and there's some fun talent involved in this one. You can tell that the concept has been textbooked a bit, but when something is easy to do right it can be okay to pick that option. Sure, you might not get the best match that you could have out of it, but it'll still be worth seeing nine times out of ten. WWE has done that with a lot of match gimmicks; mechanizing them.

This is one of those nine times, for the record, and a very good match overall. It admittedly could have been far better, though. There was a chaotic pace and the entire package was enjoyable enough.

How often do the face teams get the advantage? Just curious.

The second match was a banger. Imperium are a great team that has crossed over nicely and Wagner showed some promise. Kyle, of course, was awesome. The dude has arguably been the MVP of NXT in 2021. Of course, he left right after this for greener pastures.

I wouldn't hate WALTER getting a run in NXT like he just had in UK, by the way. That'd bring me back often.

Wagner tried to attack after, Kyle stopped it and got the upper hand. Respect. It looks like they perhaps are being better to talent that leave? PR stunt? Fuck if I know. I just know the message has been clear, as anyone attached to Triple H has been getting thrown to the curb.

The apuesta was...sigh. Trevor Lee is far better than he shows it in NXT, but part of the problem is he's been put in iffy situations and hasn't gotten to show off much. His opponent was average. They kind of tried.

The Cruiserweight Championship match didn't elevate things much. Two workers that can go but they didn't mesh well here. The belt is clearly dead right now too as is the 205Live brand.

Men's WarGames time and Gargano's send off match. I'm excited to see what the dude does. I'd be cool with a TNT Championship reign from him by the way. Basically every title run I've seen the guy have has been good. Hell, if AEW is willing, I'd be cool with a super long run from him similar to his awesome reign in DGUSA.

In all, the match was similar to the women's in many ways but admittedly far better. Fantastic, arguably a MOTYC, but somehow formulaic regardless. Still, well worth seeing for sure even if it did come off a tad depressing. I mean, they officially killed the black and gold soul with this. Perhaps being polished doesn't have to be a terrible thing either, but it does take away some of the edge of course, too. You be the judge.

Note that I don't always pay close attention to the content between matches and I rarely care much about it when I do. On this show, I did see a lot of stuff that felt tackier than ever. Jiro took a shit on camera, for fucks sake. Again, I know I am not the main demographic for this program, but I have to wonder who is after seeing that.

The entire show was far more good than bad, but there was for sure a chunk of uninspired content and it really did feel like the official death of a dying brand. Watch just the four+ star outings and consider the women's wargames and then move along if you're in a hurry.