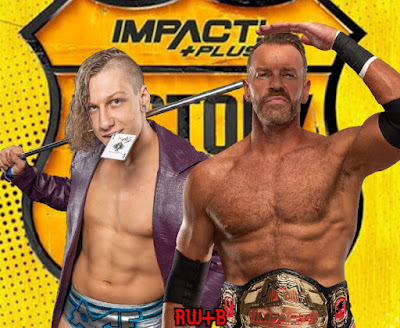 Tonight at 8pm Eastern, IMPACT! Wrestling returns with their latest special event, Victory Road. The card has some real potential and while I have little faith that they'll bring in any casual fans with this one, I still think they'll please the ones they already have. Sometimes, that has to be enough.

Maclin/TJP/Petey should be decent. Maclin will be good here in spirts while providing some size to the match, TJP will bring his hybrid style, and Petey Williams should be the glue once again. I'll say Maclin gets the nod, but roll a d3 if we're being honest.

Moose and W. Morrissey's alliance seems to be heating up and Moose in particular is still on a good streak. Meanwhile, Sami and Edwards are a fun mashup pair in their own right. The heels are the most likely to win, in my opinion. It should be better than most are expecting.

Chris Bey's time in BizCliz has been interesting. I'd prefer a stronger showing for the dude, honestly. I think we get that here with Bullet Club going over FinJuice. Hopefully Chris increases his intensity. I'd honestly love it if they'd give us an IMPACT! Bullet Club group, by the way.

For Tenille and Wilde, I think Dashwood will get the win. I'm not sold either way and the match likely won't surpass 3 stars. Tenille can be very hit or miss, but I will say Wilde could easily elevate her, and the match, beyond expectations.

Cardona thinks he's a death match legend now. Jokes aside, presuming you thought that was a joke, he's positioned higher and will get the win in his hardcore match. I have very little in the way of expectations here. It'll be okay.

Decay are a fun team and I dig these ladies holding the belts right now. I wish the division had more depth. They should retain in a match that might surprise some people.

No Deonna. I must have missed something, but admittedly I don't pay 100% attention to IMPACT! due to time issues and other promotions that I watch a bit closer.

Alexander, one of the best workers of 2021, looks to add another W to his reign as X-Division Champion tonight. This one should mean a lot and I think we're looking at MOTN. Alexander to retain.

Anderson and Gallows takes on Swann and Mack with their tag belts on the line. I'd admittedly love to see Rich Willie take the belts but I just don't see it happening. I expect a fun, chaotic title match that admittedly would work better as a TV main event instead of a special event match.

The last match is one that I'm very happy to see. I still am unsure if Omega dropping the belt was the right move, but Cage is a great worker and perhaps better than ever right now. Ace Austin is one of the best workers IMPACT! has and while he won't win tonight, I think the dude will get another great showing in.

If I'm being blunt, tonight has two legit big matches, a few that should be good, and a couple of mixed bags. It'll should be entertaining especially if the run-time is kept from being too bloated. I wouldn't recommend newcomers (or old, disenfranchised fans that left years ago) to jump in tonight, but if you're a fan that occasionally checks them out or a diehard it's worth your consideration.

Feel free to call me out for being wrong about all of the results, which I easily could be in most of the matches, on Twitter or whatever.