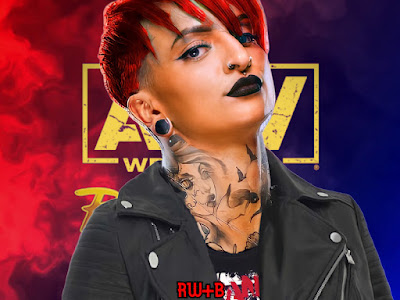 Rampage was placed in a television death slot but have succeeded despite the uphill battle. A source told me that TNT expects them to stay in the upper 600k range through the rest of the quarter and through the next and so far, they've done very well against those expectations.

It helps to start hot, which they've been doing each time.

Andrade and PAC's match, which I wish had replaced QT/Giant on All Out, was a great choice for an opener for this week's installment. A short commercial break without PIP admittedly sucked a bit, but it appeared to come during a rest period, at least. A quick defense of Andrade, since I have seem the dude getting some shit thrown on him by the IWC lately, but the dude went from working the CMLL style to being morphed into an NXT dude. He excelled at all of that. On the main roster he was told to forget all of that again and change it to their cookie cutter style. He might not be the same dude he used to be, but it's still in him and the dude, even as he is right now, is still pretty damn good. Plus, he's going to be part of a pretty big angle that's planned soon. PAC, the bastard that he is, is of course one of the best workers in the world and few disagree so I'll refrain from a similar rant on him. This match was very good and I had a lot of fun watching it. The shit finish I could do without and lessened the overall quality a bit, though.

Andrade decked Chavo after. Commentary suggested he wanted a clean win. He apparently had no issue with the attempted taser usage by Jose, though? Death Triangle then beat down Chavo.

Andrade can have Daddy Flair as a manager until that Dark Side of the Ring episode airs.

I enjoyed everything except for the closing seconds of the match and then the post drama, which felt a bit too WWE for my tastes.

Make sure to check out my new book, Red Rose: Observations of American Politics and the World Around Us by clicking here.

Darby and Sting were involved in some drama with Spears and Tully, with Shawn getting a cheap attack in on Allin. This feud will be a serviceable rest-stop for Darby.

Trios action followed. I'd have preferred this be the main event, on paper, even with the hometown boy being involved in the actual main. The Best Friends walked out the face trio but only Orange came all the way to the ring. I love hearing Rancid play on TV, folks. Like the opener, this went to commercial break during the action. Ruby and Baker is likely happening at either Grand Slam or the Rampage event that is being tapped in the same place, by my approximation. It's either that or the Philadelphia gig in early October, which is supposed to be a big-ish show, too. I actually think that's where Omega/Bryan happens with Page returning after to set up Page/Omega at Full Gear.

Anyway, I'm glad that Soho looked fine here considering it was recorded the same night that she seemed to hurt her neck a bit. The match was good, but never hit the levels I had expected, to be honest. Still, the right side won and it was more than acceptable. The build to Soho/Baker has potential for sure.

We closed with a dude that has been a minor, tag team performer in AEW against a dude that his team was feuding with before Caster made a rape "joke" and had to take a few weeks off. I get the hometown kid stuff, but they never capitalized off of the Dark Side episode buzz and let that simmer down a lot just to pop him up this month and it feels a bit off. Pillman and MJF is a throwaway rivalry but it'll be an okay filler feud for MJF while he treads water. The team rivalry will likely continue on Dark and Elevation, too. Also, Brian is a good worker and it is nice to see him getting a shot to show it on this stage, at least, even if I am criticizing it simultaneously. Fuck it, after seeing Brian come out I was actually sincerely happy to see the dude in this spot so I'm leaning more toward the positive. I loved his dad's work and Jr is underrated so a main event spot on TV is a cool sight. The match itself was good without being more than that.

The hometown boy was attacked after until another hometown boy made the save. A crowd pleasing moment. AEW loves playing to the crowd, increasingly, but it works well enough even in the predictability.

Rampage went down quick and easy, but never felt must-see outside of the very enjoyable opener. Entertaining without feeling super important. That feeling actually worked well enough in this occasion, but I can see others feeling the same way without having as much fun. Give it a look if anything seems interesting or, in the very least, just watch the opener if you don't want to check out the full hour.