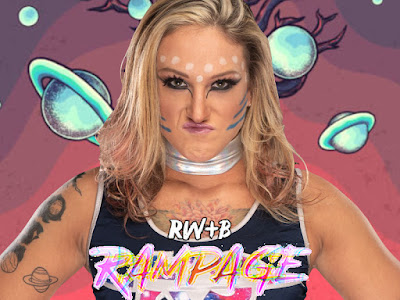 The go-home edition of Rampage ahead of All Out saw Black kick a field goal with Johnson's head to start us off. He dominated as he continued to pick apart the Nightmare Family. Decent stuff and some good story work. Black's rise has been largely enjoyable even if the card placement of the previous match was off.

Goldust ran the Satanic beast off and then cut a solid promo backstage setting up a match between him and Black for Dynamite.

Miro and Kingston shared a moment. Miro has gotten himself over once again with fans. AEW doesn't punish performers for doing so. Great mic work from both here and a fun bit of brawling. I'm somehow even more excited for their title match tonight after watching this.

The handicap match...was a handicap match. Kris looked great, Hayter did well of course, and Rebel is...Rebel. It was okay for what it was. After, Velvet helped Stratlander avoid a beatdown. A building block at most. Just watch the YouTube clipped version.

Rampage's main event this week saw Red Death versus Darby Allin with Punk on commentary. I love the build to Punk/Darby as well as the way they've been booking Garcia the past few weeks. 2point0 and Sting were at ringside. Punk wore a Hart shirt. His beer rejection was gold, by the way. The match itself was good storytelling, nice action, and just very good stuff in general. The post-match moment was well done, too.

This installment was meant to promote All Out and they did pretty damn well to do exactly that. While the main event was the only match I'd recommend watching in full, the entire episode went down super easy. Rampage continues to be an hour of excitement.