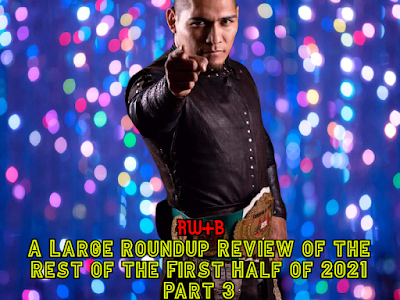 Hey look, it's part 3 of 4 of this ongoing set of matches that I missed. There's so much awesome wrestling to watch!

Up first, we have Jake Lee going over Kento Miyahara in this year's Champion Carnival finals. I honestly really liked it but also felt it was a bit off, which kept the contest from really hitting that next level that I expected it would. Somehow both fantastic and slightly disappointing simultaneously.

Second, a balls to the fucking wall spotfest. Vikingo once again looked like a star as well as one of the most athletic, gravity-defiers of all time. Crazy stuff.

From the Dontaku tour, we had two badass matches.

Tanahashi and White's battle was a nice slow burn epic with badass work from both. Tana is of course one of the best ever but White really deserves credit for how fucking good he is and has been of late. He stepped up big in his role, filling that Omega hole, and I give him a lot of credit for being one of the most complete performers in the business right now.

SHINGO and Ospreay continued their ongoing feud with yet another amazing chapter as they propel themselves further up the list of best rivalries ever. Not only a MOTYC, but this was truly a perfect match that more than delivered on expectations. I fucking loved every second of this one and strongly recommend it.

To TJPW next we have Miyu, one of my favorite active workers, challenging for the brand's top gold against champion, Rika. Highspeed, fantastic content for sure and perhaps the best Rika match I've seen. The new champion looked amazing, as always, too.

Over to Australia, we start with a PWA Tag Team Championship match between Aussie Open and Velocities. The former is arguably the best unsigned team in the game and the latter is top 10. I'd actually love to see both in either IMPACT or Ring of Honor, but who knows what's next for them. This was fantastic shit with a nice pace and full of awesome spots. The chaotic energy was both badass and also created a slight bit of unease and a roughness around the corners, but in all this was one of the best tag matches you'll see all year.

Next, Brooks and Eagles in MCW. I absolutely loved the Books three stages of hell match from earlier in the year and had high expectations for this one as a result. Despite that, I was left happy as this was a fantastic clash. Eagles was a more than serviceable challenger while the champion continued to impress me. I loved the pacing, the spot usage, and the overall contest greatly and recommend this one easily.

We close with a journey to AAA. Laredo continues to be a true force and has somehow made a title belt in Mexico feel like it means something. Meanwhile, Latigo has shined nearly every time he's been given a big match to show off in and did well here, too. I have some minor nitpicks, but this was great either way and a fun way to close yet another worthwhile set.

Part four will be up soon.