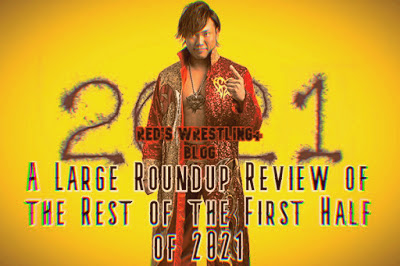 We start this one with Shun Skywalker defending the Open the Dream Gate Championship against R.E.D.'s Ishida Kaito. While I admittedly do not watch as much DG as I used to, I am still a fan of the product and have been for many, many years now. I've said that they have a very bright future ahead of them thanks to how great their school system is and this fact continues to be proven time and time again. Here, we have a dude that they've turned into a star, Skywalker, against a dude that has quickly turned into an underrated gem in the business. And their main event match overdelivered in my opinion. I appreciated the pacing, with numerous spurts of energy keeping things flowing along nicely, in particular. This one is a nice way to kick of the set and also a must-see match in general.

Next, Sugiura and Sakuraba versus Masa and Nakajima put on a match that just further showcased why NOAH is one of the top promotions in the world. I mean, this was just brutal beauty. They beat the shit out of each other, Sakuraba kept locking in submission holds, and the finish was fucking amazing yet terrifying a sight. Sincerely, one of the best tag team matches you'll see all year.

Over to DDT for two, we start with a pretty fucking fun death match. Creative and destructive and just fantastic in general. One of the more entertaining matches of the genre that I've seen in a while.

The Universal Championship match fucking rocked. Ueno is such a star and Yusuke Okada stepped up big, too. I loved everything about this and consider it one of the best displays of fighting spirit of 2021. It's matches like this that win over fans and give credibility to the belt, the promotion, and the workers themselves.

Our first trip here of many to AJPW saw Yoshitatsu and Suwama working in one of my favorite buildings. While this was never going to be anything other than a little throwaway defense, I still enjoyed it. Yoshitatsu can be a good worker in the right situation and Suwama remains one of the best grandpa workers still in the game. In all, a great match.

Back to AJPW, Kento and Zeus did it again with another top shelf encounter between the two. Miyahara continues to be one of the best workers in the world and he almost always brings out the best in Zeus. It felt like a quickened version of some of their past matches.

Ashino and Miyahara had a pretty damn good one too, packing a lot of excitement into a tight package. I'm beyond happy seeing Shotaro getting these opportunities having been a big W1 fan before they died. I figured he'd be a big star one day and he's getting good chances to show off in All Japan. Quick, exciting stuff.

Grandpa's back and he's taking on one of AJPW's best young stars in Yuma next. The company really needs to start leaning more on their modern pillars, which they're seemingly starting to do now, and Yuma is truly one of them. This one was fantastic and the end-stretch in particular was awesome.

Grandpa versus the #2 best active wrestler in the world was awesome, as expected. They sold drama, action, and excitement from bell to bell and made 20-minutes feel like 10. Miyahara has perfected his craft and continues to put in awesome performances with an ease that is awe-inspiring.

Ashino and Suwama's CC match was pretty great stuff that really did well to showcase their style and the genre in a nice, tight package. Seriously fun shit.

We close the set with Yuma and Kento. The storytelling alone made this worth seeing, but the dramatic workrate here and the pacing put it over the edge. Teammates taking each other to the limit with Yuma ALMOST overcoming Miyahara. Yeah, this was simply awesome and a very strong way to close things this time around.

This set fucking rocked. Make time for anything that you missed and thank me later.