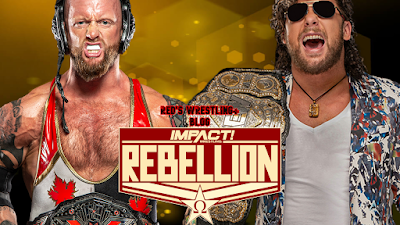 Rebellion time. After this I have one more IMPACT related review post to put up and then I am UTD on the brand. First up, X-Division action!

The TJP/Alexander rivalry this year has been one of my favorites this year. This chapter was great stuff. Strong pace, tight action, and a fun moment with Alexander taking the belt. Thumbs up.

The last man standing match is a recipe for polarization, but I enjoy the stip and think they used it well. Good intensity, nice spots, and Trey winning was a nice move.

Last up for my pulls, and Omega beat Swann to take home the TNA and IMPACT belts. Fantastic stuff and they worked very well together. There were several little bits here that worked nicely together and combined to make for a very worthwhile main event.

Mauro working commentary was nice, by the way. He's admittedly my second favorite currently at that role behind Excalibur. ROH has a killer team too and I do like Stryker, unlike most apparently, but Mauro is truly awesome. I really wish JR would move to backstage interview segments and other roles and leave the booth, leaving room for Mauro, in AEW. Oh well.

IMPACT Rebellion at the very least had three worth-seeing matches of varying degrees, each of a very different style. I get the stink remains for the brand, but they have a lot going for them. If you don't want to watch their weekly show regularly, at least consider doing what I do.