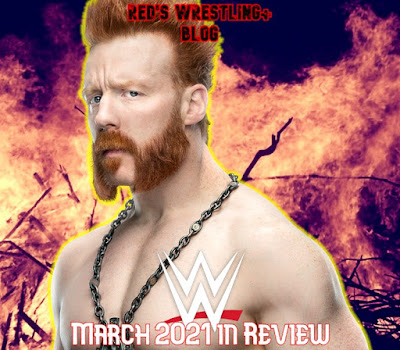 McIntyre and Sheamus was the big angle of the month here, with a majority of my pulls involving the two. The first match pull was pretty good between the two and enjoyable enough stuff to recommend it to those that missed out while the second was good but skippable. I'd add that having a no disqualification match end in a no contest is weak af.

Next, Balor and Cole in a title match on NXT TV which was great stuff. Balor was so damn good as champ and every defense was worth seeing. It tied in a bit to the ongoing Kyle feud, too.

Sheamus and Lashley was fun and fairly good stuff. Sheamus always works well in these roles and Lashley is fun when motivated, which he's been for sure of late. Just outside of recommendation levels.

The first two matches were building blocks to #5 of this set which was a fucking banger. I appreciated the intensity and sincere hard work on display here and give major props in general to both. It was a fantastic brawl with a strong pace and well worth taking time to see.

Following that, we had a very good title match between Bryan and Roman. The finish and endstretch in general will be polarizing, but the contest overall was good shit and served well to ensure that both came off well. Great storytelling mixed in.

The rematch between Lashley and Sheamus was a good-for-what-is-was battle and a nice, short match. The Hurt Business helped the champ out and there were decent touches of physicality.

We close with one from the UK side of NXT. Ilja and Gradwell fucking killed it. Ilja I wasn't surprised by because the dude is fucking awesome. Gradwell, well, this was the best thing I have seen the dude in for sure. Like the Fastlane Sheamus/Drew match, this was just high intensity stuff sold well with a nice pace and I loved it even if the acting at times was a tad meh.

So, the Raw brand had the biggest story here in regards to quality for the month. That never happens. The Lashley/Sheamus/McIntyre thing was enjoyable and gets a thumbs up for sure. Lashley is just a solid champ and I've enjoyed his reign. On the blue side, Reigns continued his awesome run at the top by beating Daniel in a worthwhile one. NXT and NXT UK both had something worth seeing, too. This was a building up month with WM happening shortly and felt as such a bit in tone. Check out the matches you might have missed that catch your eye but know the entire set serves as a decent experience.