NJPW on the Roku Channel #24 Review 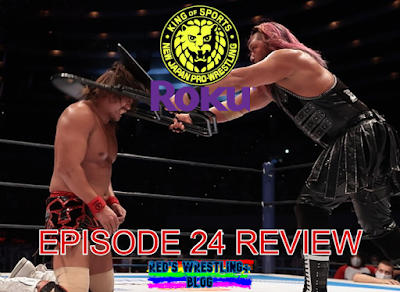 Matches:
1.IWGP Heavyweight/Intercontinental Titles: Naito(c) vs EVIL ***
Thoughts:
I wanted to start introducing my kiddos to New Japan so I figured this would be the easiest method. I started with this one because I think it's a decent entry point. The G1 starts soon after, you see a title change, and you see one of the weaker matches that will likely air on the series which sets expectations lower than you usually get with this company, making the next ones feel ever bigger.
Now, I have seen this one before. I complained last year enough, but I'll say that it is a good match only because of the hard work of Naito. It was overbooked, the pacing was off, and the title change felt like an instant thud. It is not something I'd normally recommend to more general fans outside of the circumstance I suggested above. I'd also note that I sincerely dislike the production choices that are used here as addons specific for this release that feel very Busch League.
Regardless, it's an episode worth considering as an entry point, especially if you're wanting to start watching with your kids. Otherwise, skip it.
(I'll be watching through the next few to catch up, with the goal of watching the new releases every Thursday.)
WATCH THE EPISODE HERE.
Overall Rating: 60/100%
Red's Reviews Wrestling