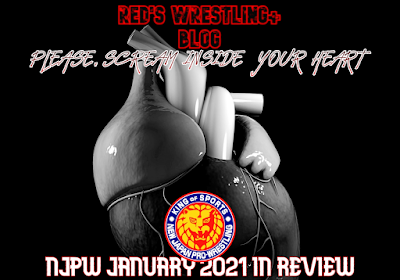 Matches from Wrestle Kingdom 15 Night One

Matches from New Beginning in Nagoya

New Japan has been making some fucking weird ass moves of late. Last year, once they returned from hiatus, they launched EVIL into the main event scene, putting him with Bullet Club and having him win the IWGP Heavyweight Championship from Naito. They thought they were using rocket boots but it was just a dumpster they were lighting on fire. It wasn't handled very well, the matches were far below the quality fans expect from NJPW main events, and their rivalry was overall poorly received, turning off a lot of fans. Now, when the wrestling game has so many options and while New Japan is still trying to get their feet more firmly into the United States, it's a bad idea to drive a single fan away. I continue seeing a jumped the shark tone from fans and, while the IWC can be fickle, you really can't stand to drop anyone especially if you're New Japan. The good news, for now, is that the roster is still a top three bunch and there was a lot of fun to have content-wise. It isn't hard to get back on track and get that good will buzz back, but it requires actual effort. I have more to say for February/March, but that's my big takeaway for where they were heading into January.

The first set of pulls here was from the annual WK gig, starting with the always awesome Hiromu taking on El Phantasmo, one of the weaker links of the Bullet Club. This was pretty good overall but admittedly not a WK caliber match and I feel that the event being a two-nighter again this year is part of the reason why.

Next, Ospreay and Okada put in for a fucking MOTYC. Despite my high expectations, they surpassed them and gave us a truly awesome match full of drama and action. I love that they have Bea with Will here, especially holding her STARDOM gold, but my desire to eventually see joshi performers getting a spot on modern New Japan shows will still never likely happen anytime soon. This was an epic burner, slowly building in waves and one of the best matches you'll see all year! Okada was in full form as was Will and that really says everything you need to know. Whatever issues NJPW might be having, I'll always come back because of shit like this right here.

Last from night one of this year's WK, with the god known as Naito defending against Kota. It didn't happen in January, but I still hate that they eventually unified the belts. More on that later. Here, Kota Ibushi was finally given that push he had always strived for as he topped Tetsuya in a top shelf battle. They have a long history of amazing matches and are honestly one of my top five current day rivalries. This was a worthwhile chapter addition to the novel and even more impressive considering Kota had another big match set for the next day! I'm sincerely hoping no one reading this has missed the match but fix that if so.

Over to night two, we start with SHINGO defending against Cobb! This reminds me that I need to fix my Cobb that I use on Fire Pro World. Note that this one was one of my most highly anticipated matches on my watch list simply because of how much respect I have for both and how awesome I just knew it would be. SHINGO and Cobb, a dude that was long overdue for this spotlight, worked a back and forth bomb heavy battle of big dudes, trading blow for blow in an adrenaline injected contest for the NEVER Openweight Championship. Not only was it a beautiful display of athletic art, but it was also one of the best matches of the year and a true top shelf MOTYC.

Building off of one of the more poorly received feuds in wrestling from last year, EVIL and SANADA are up next. SANADA apparently now cares, kind of, which is rare for LIJ members. That said, the heat was minimal, with Seiya even breaking out the shitty paradise lock. Interference and ref bumps on full display here didn't help matters. They both leaned into it being a rivalry match and didn't, and the work suffered from the shenanigans. Really, I pulled this hoping it'd be a redemption match of sorts but it was another disappointment that was almost comical at points. Just enough to be "good" but a paradox if ever there was one.

Next, Hiromu beat Ishimori in a fantastic match for the IWGP Junior Heavyweight Championship. Athletically insane, as expected, and high spot after high spot, also as expected. Perhaps a weaker encounter between the two than expected, but solely because of the high bar these two tend to set in general. It's a good problem to have and a match well worth going out of your way to see, regardless of any perceived downplaying of quality that the reader might have taken away from that statement.

We close WK coverage with Jay White falling to Kota Ibushi. I was so sure of White's victory here heading into this months ago but was pleasantly surprised by the outcome, which is sincerely no knock on Jay who I've seen as a dude that stepped up big when Kenny left and did well to fill that massive hole as best he could. They played the cheap heel work to a minimum here, utilizing it perfectly, in a way that actually took nothing away from the quality. Perfect story telling and epic in a way that few film directors could match, and the ebb and flow was masterful. Truly, a five star classic and an all-timer.

Jay reaching for the belts after was beautiful.

Next up, Ospreay and Kojima worked a no disqualification match. While companies like WWE have developed a general formula that they recycle with little twists on gimmick matches like these, New Japan use such things so rarely that, when they do, they often avoid the general tropes. This can be jarring at times but are enjoyable in hindsight and reflection, especially considering the quality of the workers that call NJPW home. There's a freedom that makes things enjoyable. But yeah, this the best Kojima match in a long while and a great hardcore match in general. Worth a click if you like such things.

Two vets. Two of the best ever. Two amazing performers, competing one on one for gold. We closed this set with one of my new personal favorite matches. That I gave a match five stars in this collection is one thing. Giving two? I must be high as a kite? Regardless of that, which I will neither confirm nor deny, I stand by the rating. An ACE triumphs over a dragon in this one, with nonstop action and drama building as high as a fucking tower and then ending at the exact right moment. It was fighting spirit defined and sincerely something that I cannot recommend enough. Watch this NOW, even if you've already seen it once!

So, building off what I said at the top, I'd add that by the end of the month we had a bit of a shift in the positive. Kota as top dog was well received by most, White had a lot of buzz, and people were decently interested in many of the stories. The usual suspects were involved in many quality clashes and EVIL was back where he largely belonged. We had classics on full display and two all-timers. For January, New Japan proved that they are back on top.