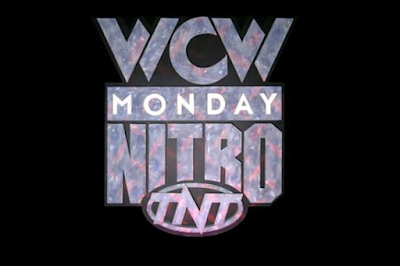 Like last week, which hurt the entire episode, this week also has four matches. The good news is that it was paced a bit better.

We start with DDP and Badd...kind of. DDP hit Badd in the back of the head with the Television Championship, knocking his opponent out. He then mock pinned him before setting off the confetti cannon that Badd typically brought out each time. I'm okay with it because it likely sets up a much better match later and it kicks off things with DDP looking like a big heel.

The next match saw Benoit debut and beat Eddie in a pretty good match. It was given nearly nine minutes and they both made the best of it, looking like stars in the process. It's one of my favorite matches from the WCW watch through I've been on thus far and worth seeing.

Post, EB mentions that they are starting to form a cruiserweight division!

Mean Gene in the ring tells fans to call the hotline and find out about Watts quitting as well as the Syracuse incident. Then he interviews Taskmaster and The Giant continuing the build to Halloween Havoc. My kids are very excited about the show and it's funny but many of the things they find the most enjoyable have been things I have disliked on this show.

Disco Inferno once again comes out, dances, and that's it this time as he disappears when Meng arrives. Good move. Then we saw Meng take out Duggan in just over about two minutes which was interesting if nothing else.

A taped promo with Hogan and Jimmy Hart followed and was, in hindsight, a tease to the much bigger heel turn that we were to get the next year. It was arguably the best Hogan promo on Nitro thus far but that's not a high bar to hurdle.

A clip from Pro gave us insight on the lead-in for the main event.

The main this week had Flair working a handicap for a while before the numbers started to add up. The fans, chanting "we want Sting" were eventually rewarded as the legendary one made his way out and cleared house. The match was average but entertaining but also problematic. Seeing Flair hold his own for so long against his top rivals made Arn and Pillman look weak. Pillman in particular has been increasingly coming off as a weak side kick. The countout victory was acceptable I suppose. The good news is Sting and Flair teaming again and the rematch announced after for Halloween Havoc looks promising, too.

Next week on the go home show we are getting Sting and Luger against Harlem Heat and Wright will team with Eddie to take on Malenko and Benoit!

I was worried when I saw this one had four matches but honestly this was much better handled than last week. The opener made DDP look like a big deal, albeit lowcard, heel. The debut of Benoit was handled very well. The main worked for what it was. The crowd was hot. Really, every complaint I'd have for this hour of wrestling is just a nitpick. This was good entertainment and worth seeing.