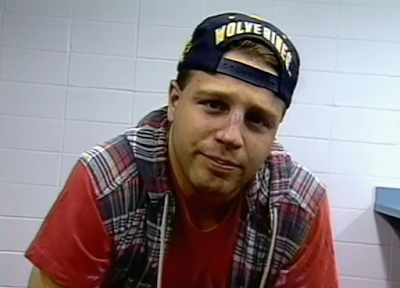 This one starts with Dreamer and Raven brawling before panning a bit to show Luna, Richards, and many more fighting around the arena. Good shit and a fire way to kick off the episode. Sandman and Woman come out before we jump to the big Tampa Bay Brawl in action. It's just a cluster battle royal for those that might be wondering.

Jannetty and Whipwreck were the final two and the former managed to walk away with the W. While the match wasn't anything special, it was still a cool moment seeing the underdog win as was the handshake after.

Sandman attacked Marty after and then wacked the shit out of Mikey, too.

Their "match" was just Sandman beating the shit out of a warn down underdog and getting an easy W. Not my thing and if WWE did that today they'd rightfully be called out.

Mikey challenged for another shot later with Joey in a backstage segment.

Taz was with the Steiners in another backstage segment. Taz is wearing a neckbrace after the spike piledriver from the last episode. They then moved to Scorpio cutting on Taz. Good shit.

Malenko challenged Eddie for the Television Championship next, with a stipulation added that if Dean lost he'd no longer challenge for belts. Of course, they'd be both gone and over on WCW soon after this. This feud was easily one of the best of 1995, by the way. Every encounter, when given the chance to excel at least, was worth seeing. This was no exception and was a fantastic and beautiful technical battle.

Next, a rematch of Mikey versus Sandman. The loser gets 10 lashes with the Singapore cane. It was pretty bad. Sandman won when Mikey slipped on the top rope.

The post-match angle with the lashes, on the other hand, was super well done. I literally don't want to ruin it if you've never seen it before but just know that the raw emotion of it made it an amazing, brutal moment that is for sure worth seeing if you can stomach it.

The episode closed with Marty and Mikey calling out Sandman backstage.

This one was a mixed bag but it all served a purpose. The underdog story told here, the epic final, and the amazing technical battle in between. Yea, go ahead and watch this one!