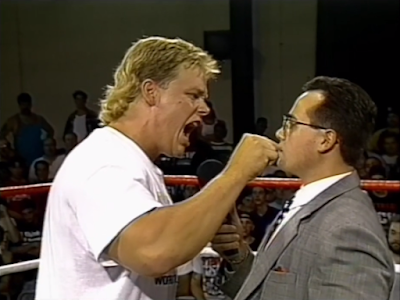 We start with news that the ECW Tag belts changed hands at a house show, with Raven and Richards taking the gold. Then we saw Jack calling Shane an ignorant slut before shaking his hand and moved on to a clips of other happenings in the promotion.

While the opening stretch this week was a cluster of various clips, it was all pretty well edited for the time period and honestly not a terrible use of time even if a bit offputting by today's standards of wrestling television.

Post intro package, Shane Douglas is out with Joey Ryan to put himself over, shit on ECW, and explain his status and move to WWF. It was good shit. The dude simply rocked on the mic. The crowd at one point chanted that they wanted Flair which triggered The Franchise perfectly. Gold, but of course even in the 90's VKM was prone to fucking things up and shortly after, Shane was working as a college dean and being misused.

The segment ended with some misogyny because of course it did, and had a minor moment between Jack and Sandman, too.

A longer clip of Raven and Richards winning the belts followed. The decision was changed moments later. Then it was changed back. Messy shit. Richards cut a backstage promo after.

The first match of the night, 30 minutes in, saw Taz and Scorp which sounded awesome but honestly it was super basic and toned down. A sprint of energy at the end, then a shit finish leading to Alfonso calling for a restart to the match. Paul was about to attack the douche ref before Scorp hit Taz with a chair. Bill then took down Paul with a cheap shot that looked super weak, making Paul look super weak. Scorp hit Taz with a leg drop from the top with a chair placed on his chest and got a three count.

Alfonso with a backstage promo meant to fill the building for the next gig.

A fucking mess is shown in clipped form next of Sandman versus Cactus. Ref bump, Franchise attacking Sandman and then Jack. Sandman got the W on a cheap finish.

Tod Gordon and Shane shared a moment to close the episode that ended with Shane attacking the commissioner and then 911 chokeslaming the now "fired" Douglas. It was actually pretty fucking good and an enjoyable close to this car crash episode.

This one honestly was entertaining but in the same way that driving by a nasty crash is entertaining. I don't recommend checking it out.