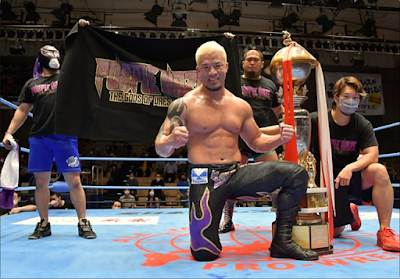 Thoughts:
Getting back on track, hopefully closing out 2020 as soon as possible.
We start with a killer, MOTYC level encounter between the almighty Kento Miyahara and Zeus. The latter is a great worker especially when facing off against the right guy. Kento is always the right guy. I appreciated the high level workrate on display here, which more than lived up to my expectations, and even though I am surprised a bit at the overall outcome of this year's tournament, I still applaud the match itself. Remember, Miyahara is a top three worker and is always worth checking out!
Next, a throwaway match that fucking rocked my socks! It really speaks to the talent level of New Japan that this was as good as it was. The belts that were on the line mean very little, only half of dudes in the match are actually considered semi-big deals on the roster, and it was on a show that most people skipped. Despite that, when they could have easily phoned it in post-G1, things just clicked. Check this slow burn out as soon as you have a chance!
Next, back to AJPW for some tag team action with one of the best teams in the world taking on one of the most underrated teams in the game. Note that while I am still very disappointed that W1 is dead, I am very happy that a large portion of the roster has already found new homes, with a majority going to either NOAH or All Japan and both companies have proven to be nice fits for the talent. Ashino was the W1 ace and is already being used as a strong member, for example. Him and my second favorite meatball in wrestling worked a great one here, though I admittedly wish the outcome had been different. Far from a MOTYC, but still very entertaining stuff.
Last up, Nautilus and Eruption! It started with a quick attack from the champs before Ueno got knocked the fuck out. Note that I love Nautilus, but Eruption have been a force and came off as exactly that here. They not only were given the nod by DDT, but they were truly deserving after that display, too. Outside of the finish coming off a tad weak, this was great stuff and a strong way to close the collection.
As always, more reviews to come!
Red's Reviews Wrestling