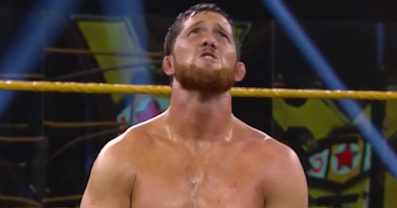 After this set, I am almost done with September and only have a few more things to watch. Slowly but surely, I catch up.

First, Kingston of all fucking people in a main event against Jon Moxley. I watched Eddie's promo from the same evening. Kingston has been a workhorse for years and seemed to be another guy that never broke out and fizzled instead of rising. Now, he's a big name on the hottest wrestling show in the United States. The match was pretty good and felt like the fight I was expecting. Brawl style fans rejoice. Post, the Lucha Bros came and fucked shit up before Hobbs came in for a failed save. Chaos continued when Darby ran in, temporarily cleaning house before Taz's Ricky Starks put the heels back on top. Entertaining stuff for sure.

The Gauntlet Eliminator match was a #1 contender battle featuring O'Reilly, Reed, KUSHIDA, Thatcher, and Grimes and not only was it well worth seeing, I have to applaud the gimmick and the way it was used, too. If you remember Lucha Underground's Aztec Warfare, which is a decent comparison that most fans should recognize, you'll know what to expect.

Have I mentioned before how much I miss that damn show?

It started with Kyle and KUSHIDA in a brisk, tech battle that set the tone and pace for the match ahead. Reed joined shortly after and crashed through the two like a bulldozer. Sadly, the fucking groomer dipshit was involved in a quick run in that set up KUSHIDA's elimination. For those that don't know, the "man" that I am speaking of is on my blacklist. No matches that have him booked as a competitor will be watched nor reviewed here and his name will go unspoken. Past that, this was a roller coaster of action and the hectic nature worked nicely enough. They all got some chances to shine, the nearfalls worked well enough, and I'd argue that the right man won. There's very little to complain about here and I'd sincerely suggest adding it to your watchlist if you missed it. Great stuff!

Closing the set, we have three matches from the 09/30 episode of Dynamite.

Darby and Starks played it down the middle, even game across the board, putting each other over down the stretch before pulling the trigger with Allin going ahead. I was wrong about Ricky, by the way. I've said before that he's talented and a great talker, but that he wasn't star material based off what I had seen. Now, regardless of my own opinion, which has grown for the record, I am seeing folks say stuff like he's the next Rock. His charisma is putting him ahead and he's working hard. Props. This was pretty good stuff and served as more proof that Darby is a future star, too.

The AEW Tag straps were on the line with FTR against SCU in a pretty good defense next. The only thing I largely disliked was the finish but it was okay for the situation. In many ways, I think if NWA could pay to get bigger names that they'd aim for this to be the type of match you'd see every week. Old school in many ways, and it was enjoyable enough to recommend.

Last up, Jericho and Isiah. The Private Party boys are more hit than miss, though they have a perception about them that somehow suggests the opposite. Still, I've been impressed with them more often than not and think the Isiah half of the duo here stepped up decently. I think he really needs a change in his look, though. This was good stuff with Jericho once again, as a worker, showing his value in more ways than one.