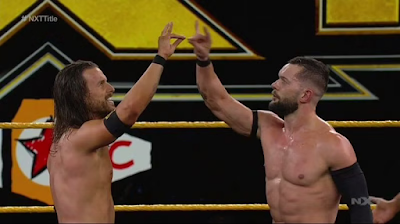 Up first brothers versus brothers, as in a situation like if Jeff Hardy and Jey Uso took on Matt and Jimmy. This was actually really fun but I do have to ask why some people feel the need to lower their masks to talk? Here, fans could be seen lowering their masks to cheer. Why? Anyway, this was right on par with my expectations in a good way and was full of hard hits and fun spots and you have to love brothers beating the hell out of each other. Check it out if you like this genre of lucha libre.

Next, from the same gig, Shun Skywalker, who just won the Open the Dream Gate Championship this weekend in Dragon Gate, took on Demonio Infernal for the Rey del Ring belt and boy it was great, chaos. Spot after spot, some nice nearfalls, and both came off looking well. Add this one to your watch list, too.
Now, to NXT. Remember when they had Kross go over and win the belt but he had to vacate immediately after, and then they promoted a four way to crown a new champ but went with a bait and switch, giving fans a cheap finish? No? Well, the third pull is the aftermath of that. Luckily, I don't care enough to be upset by the bullshitery. I will say that Cole and Finn had a fantastic title match and I thought they killed it! The brand has a lot of issues these days and, in many ways, always has had issues, but this rocked either way.
From the same show, our fourth pull was a women's cage match that really had a nice intensity level. While I thought they utilized the cage a tad too much and could have done without the Stone stuff, I appreciated the overall format and use of weapons. They worked hard and really this was great stuff.
Last up, back to Mexico. I am wondering why the promoter didn't tell the talent that fighting in the crowd is a bad choice right now, but fuck safety at this point. That's a statement as true as the known fact that Jesus was circumcised in space. So, Skywalker knocked DB out cold in this one. The finish was weak and it was a bit more uncontrolled chaos feeling than expected. Still, it was fun for what it was in a reckless sort of form.
As always, thanks for reading.
Red's Reviews Wrestling