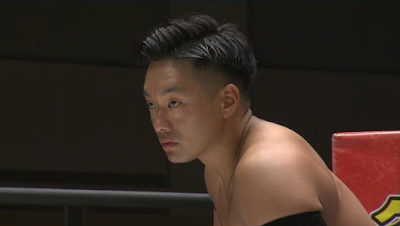 For the second round of August coverage, I start with a match from Raw of all things, with Asuka and Bayley facing off. It's sad, but WWE arguably has the best roster in wrestling. They certainly have the best female roster overall across all of the brands if nothing else. While it's hard to see that at times, these are two of the best workers from that pool and I am glad they were able to once again showcase their abilities. In all, I found this to be a pretty good match and I appreciated the pacing.

Next, a battle between CHAOS mates. SHO is a guy that has a bright future ahead and I am eagerly awaiting his move to the big picture in a few years. I also am super excited at the idea of seeing him in a singles match for perhaps the NEVER Openweight strap against Ishii. That'd be an epic contest. While a large portion of 6-man matches that take place in New Japan are admittedly skippable, despite the fact that I sincerely consider this to be the best roster in the world, here they broke from that trend and provided us with a sincerely great trios match. The layout worked well and it was the right amount of chaotic entertainment. I hope this is a sign that one of the few weak aspects of the company is starting to tighten up. Worth a watch!

With both the National and Heavyweight belts on the line, Kenou and Go went to war in our third pull and they went for a full 60 in an epic time limit draw. The outcome was pretty predictable, but that's fine in my book. I don't mind spoilers that much either, caring far more about quality than anything else. In this case, bell to bell, I must say that I consider the work here to be of such a high caliber that it solidified my position that Go is one of my top workers of the year. A MOTYC, I consider this a true must-see contest and one of my favorite matches of the year, for sure.

Match four takes us to the states for a multiman from Dynamite which was frantic in the right ways. There's not a lot to note but it was very good stuff and a nice showcase for Omega and the Young Bucks. Post, Kenny teased the return of the cleaner.

The third, and final, collection of August match reviews should be up by the end of the week. The latest RBI and Open the Dungeon Gate will be up soon, too.