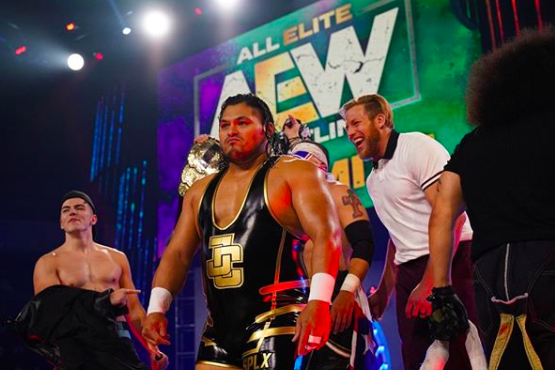 I wanted to see the television version of what I saw last night, partly to see how it translated and to compare it, and partly for the vain idea of potentially spotting myself of my wife. It might also help me remember small things I forgot about here. It likely won't be as detailed as the other one, for the record and will actually be more about little extra things I think of. Consider it, as a result, a companion piece to the live review.

If the rating is different here than the live rating I will likely switch it for the 2020 recommendation post, just so you know.

Thoughts:
Before we get to the action, let's take a look at this week's rankings.

Not a lot of surprises, though Kip being in the top five of the men's division was one if any. Yuka being included is a nice sight even if I have no idea when she'll be back. That's about all I have to say for now.

Justin Roberts is fucking amazing. SCU worked a bit more dirty than usual last night, or at least dirtier than they've been in AEW, but were getting a small bit of heat even during their entrances.

When Dark Order appeared on screen, fans around me were pissed thinking they were about to ruin the match. Note that I'm actually sold on the angle, besides a few missteps, largely due to the talent involved and the fact that I have hope for the next big move.

You can see a guy holding up an Austin 5:12 shirt (512 is the Austin area code) in the background at times. He was in the parking lot literally giving those out for free. I got two.

Not sure if I had noticed before last night, but the backs of the Tag belts have a snake skin pattern.

Kenny and Page's double team moves are pretty damn fun. Page might not have been ready to be the first AEW Champ and I agree Jericho was the right call, but I also have enjoyed his rise and the fans are responding well. He should be ready, should they want to pull the trigger, by the end of the year. Maybe sooner.

The rest spot in the match made the guy behind me leave to get a beer, which was funny. He missed a lot of the show and later complained to his buddy that the show didn't have much going on.

There was a "full beer challenge" sign I spotted last night that was fun.

Kaz failing to roll through on the dragon was even funnier on the broadcast.

The match was indeed great, but a touch below what I felt it was live. Maybe it didn't transition the same, but I still really liked it.

I love JR using Matt's name for the Bucks during the post-match. The Exalted One cometh soon!

I love Santana's interview with JR even more and Darby's package got a solid pop at the end when he challenged Sammy.

The all Texas match was a smart call. Dustin was pretty over with the fans and I saw a multitude of horns up thrown. I was one of the few on my side cheering for Sammy when he came out, for the record. Oh, when Dustin took the shot to the table he took it worse than just about anyone I've ever seen. I love the dude, but...

I think Sammy should've won this, albeit with assistance from Haggar.

Dustin does know Haggar's mma career is actually going fairly decently, right? The Jericho's bitch chant got some good use and I can only assume it'll become a commonly used one around Jake for a while.

While Baker's promo might have been a bit cheap but it worked. The Whataburger chant and horns down finale really helped. I don't remember standing and chanting along, but unless someone else was wearing yellow plaid, the cat Omega shirt, an AEW hat, and had a beard, than that was me. I also can be seen in the Fite stream standing next to the Omega sign throwing up a two sweet.

During the part where they are showing the fan's signs, one kid near me had one saying he turned 8 that day. We all sang happy birthday to him. Another fun one said they had called out sick to be there.

The women's match was great, as I said before. I loved the table dropkick spot. I also love Nyla teasing the One Winged Angel and then Riho using the dragon sleeper right after. I really do hope we get a mixed tag match. Oh, and Riho's northern lights is a thing of beauty, by the way.

I am seeing some transphobic shit going around and want to remind anyone reading this that fits that term that they can go fuck themselves. No debates, no bullshit. Just go fuck yourself.

I am also seeing some claim Nyla wasn't ready, which I get to a degree, but I'd also disagree. She has gotten better and works well with the right person as a strong base and sets up a nice David and Goliath tale, too. Also, she should work nicely as champ for a nice, little run and it could be a good move to continue building the division.

I love the way Khan has been seen on AEW. Always just tiny little moments, as it should be.

The booing you hear is because we can't hear the fucking segment, for the record.

Have I mentioned how much I LOVE Cobb working AEW?

My wife, during the recap of the lashes video joked about how many Texans understood how fucked that segment was and how emotional yet don't mind doing it to their kids. If you are abusing your kids, you can also go fuck yourself.

So, Brandi is in limbo clearly but is playing things face it appears. Again, props to AEW for listening even if I think they could've killed the angle a bit differently. To be fair, the entire thing had been a botch so it is what it is. I look forward to seeing what she does next.

MJF got the most heat of the night.

One of the best things AEW does is take guys like Jungle Boy and give them a chance to shine. I just hope they add a secondary belt very soon.

I didn't see the I 💗AEW shirt there last night, sadly. They had a cool one with the AEW logo featuring the Texas flag, which was a cool niche item. I still wish they would've had the Inner Circle hat that Santana was wearing.

Next week's show is stacked!

The guys behind me trying to figure out who PAC was made for some laughs, mainly because one finally remembered he was in WWE but couldn't remember his name and, even when I tried to help which they ignored, they butchered it.

I was below Jericho, but in row C. He was right above us, which was cool.

The main was fairly good and a nice use of the situation. I still love Cobb coming out to close the episode.

As I said before, this is one of the best episodes of Dynamite yet and it was a thrill to be there live. The broadcast did a good job showing what I saw in person. I was in the HEB Arena for over four hours and it felt like two, tops. That says something.