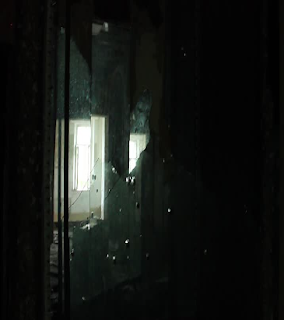 Welcome to the first ever RWB Module. This is a touched up version of an intro adventure I did a few years ago, and I have left out specific stats so that you can fit it into any system you'd like. Remember, when running this make sure that everyone is having a good time. That's more important than anything else when playing an rpg.

This works best with 4-6 players of the first level and will be the first part of a much larger story. 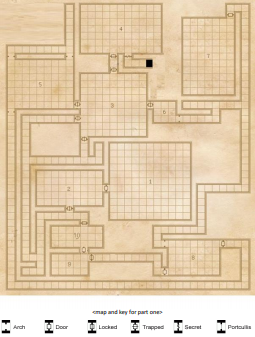 ROOM ONE
The party awakens from their slumber, each full of questions that begin to rapidly enter their minds.

Who are these strangers?

All of these would be good questions as the players have very limited memory at all, due to a dark spell.

They are all unarmed yet wearing decent armor.

There appears to be no clear exit from the room.

A careful search of the room reveals a secret path to ROOM NINE.

They'll also have occasional memory flashes, some of which are planted.

Again, how you handle these is your choice but I would suggest the idea of writing them on a notecard and giving it to a player secretly so they can pick how to react for at least a few reveals.

ROOM TWO
A simple chest sits in the middle of this room. A quick search can reveal the grey stone floors bare dark stains. The entire room looks like it was home to a massacre, and the trail appears to lead towards the door as if several bodies had been carried out of the room.

While the group searches this room, the door behind them closes. If a player succeeds a DC20 Listen check, they may hear the sounds of mad laughter through the walls coming back from Room 1, yet seem unable to locate a way back in to investigate the source.

Within the chest are weapons for the party to equip. This is not a trap. Allow the players to pick their gear, and perhaps give some loose guidance based on class if needed. Also, there is a strange coin within the chest.

Here’s a full list of contents:
-a collection of “starter” weapons for each player such as short swords, long swords, etc. (ensure that each player gets a basic weapon for defense)
-rations to last the group two days
-if no cleric is chosen as a pc, have potions of cure light wounds equal to the number of players
-a strange looking coin with unrecognizable symbols on both sides

There is another door on the south wall, though this one is locked. One of the players actually holds the key in their possession. Choose which before the game starts, and tell them in private. The iron door has diamond shape above the key hole, and the key has the same symbol engraved on it.

ROOM THREE
The group may choose to make their way down the long hall towards this room. The issue is that all the doors into this room are locked firm with a good D30 strength lock.

A key is held by an enemy that the players will encounter in room 5. That key also opens the door towards room 4.

A warning is seen on the south wall within, claiming that “one of you is not to be trusted”, serves to add more to the drama at hand.

ROOM FOUR
This large room has a trap door on its’ south face. It’s a DC15 to spot, and any attempts to pick the lock without disabling the device (also DC15) will cause a small amount dart to shoot from a small hole in the door. They shoot out about ten feet, doing 1d4 of damage.

The room itself has every wall made of mirrors.

On the south wall, near that of the way in, is a door with a riddle written above it. “A head sees new trails and a tail ends the tale”

Placing the coin in, heads up opens the door. Stairs down are on the other side. Consider this moment the END OF PART ONE.

Placing the coin in, tails up causes clones of all party members to walk through the mirror and attack and the coin to shoot out across the room. If the clone NPC is with you, she too will attack the group, though the new clone of her will aid you. Putting the coin back in correctly will cease the attack, with the clones dropping dead.

ROOM FIVE
This dining hall has three goblins and a hobgoblin leader. The hobgoblin is in charge of this level of dungeon. If they hear the party coming, they will flip over the three tables in the room as cover. The goblins have 5 HP, the leader has 6.

The leader is the only one with any real info, but truly only knows that a sorcerer with no name employed their services.

A D20 Intimidate check can cause the hobgoblin to reveal a hidden weapon stored in his chest. Behind this room is the sleeping area for the enemies, where a chest also sits. It belongs to the hobgoblin, containing 50 gp. A DC20 check, or knowledge from the hobgoblin, reveals a hidden compartment below that hides a strange painting that he “likes for some reason.”

The enemies hold a total of 40 gp and the leader holds a key to Room 3.

PART TWO WILL BE RELEASED SOON
Please let me know what you think of the first chapter.
Tabletop RPGs