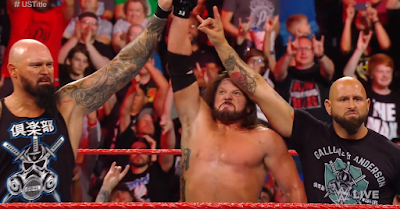 Thoughts:
This is the first, full episode of Raw that I've seen since February, 2018. I am breaking the streak due to a desire to see how the first Heyman episode went for myself. Remember when 205 was trash until the right people took over? Now, I'm not saying Paul can make Raw must-see or anything, since Vince still ultimately controls the series, but I am saying I wanted to give the first episode a fair shake.

Know that I'm watching this on Hulu as I just don't have time to watch live. This version is cut down to an hour and a half, so keep that in mind because they cut some of the fat in this format.

So, the first major thing of note is that we're actually starting with action. Seeing clips of the feud between Braun and Lashley in a tug of war was laughable, but I'll look past that and just say that for five minutes, these two big men had a nice little brawl and the shock and awe finish worked rather well. Paul wanted to start with a bang and he certainly did. These over the top spots with Braun are nothing new, of course, but it felt less comical than most of the previous ones I've seen.

They show clips and chat about the situation for a while, but not to nauseam and another match quickly starts after.

This wild card rule has yet to be explained to me in a way that makes sense, by the way. I just know it seems poorly thrown together and largely defeats the point of a brand split.

The tag match itself was meant to just be a pilot for the six-man, which is fine since they kept it under three. The six-man that followed was actually a good, little contest.  Kofi and Joe looks like a decent little rivalry and the finish here was very well done.

AJ and the good brothers together backstage is a nice sign, though they teased tensions. From what I know, they've largely kept these three away since bringing them in. I'd love to see them, and Finn, working together as a major group on Raw.

The NXT Tag Champs, the Street Profits, get a surprising apparance. That's interesting.

Since we had so much wrestling to start, we're paying for it now.

The Miz is shown getting beaten down by Shane and Elias. Why the hell did that happen? Nevermind, I don't care. They tease a 2/3 falls match between Elias and Miz as a result, further proving that the wild card rule is just a lazy excuse to kill the split.

It looks like Shane is involved in multiple storylines for some reason. They tease the Taker being involved. I have questions that I don't actually want answered. I am glad Drew is getting a push, but being tied to this plot seems like a poor idea.

I love the Undertaker, but he needs to stop.

Corbin and Evans backstage tease an upcoming match against Becky and Seth. Not completely terrible, but nothing I really cared about and the match they're teasing looks pretty bad on paper.

Lacey and Natalya worked a short and mediocre contest. I'm glad I won't be watching Extreme Rules as a result. That's the exact opposite response I should be having.

Ricochet chats about being US Champ and main eventing against AJ a week prior. Anderson and Gallows play intimidation games and then manipulate AJ. They were close enough to Ricochet that he should have easily heard them chatting, but oh well.

The segment was a bit iffy, but the slaps at the end were at least good.

Elias starts to play before being cut off. They are still trying to figure out how to use the stipulation format, clearly. You can't have a 2/3 fall match be shorter than a lucha lighting match and expect it to be a good use of the gimmick. Knowing Vince, he'll drop this idea before they do, though. The match was pretty decent, even if it was nothing you'd need to rush and see. Miz looked a bit better than usual.

Solid midcard stuff that got the show back on track nicely and woke me back up.

We are back to looking at the Seth, Becky/Corbin, Lacey match with a backstage segment. I still don't care much about the contest, which is sad since Seth and Becky are such talented workers.

Slight comedy stuff there. Seeing Mike being booked here as Maria's bitch seems like punishment for his Twitter rants. Maria's mic work remains top notch, though. It's been a while since I've seen Maria in-ring. She remains a better manager than wrestler but we of course didn't see her wrestle because they basically ran an ECW story and not one that was really worth retelling.

I feel bad for everyone involved in this general story.

We close with AJ challenging for gold. Last week's match was enjoyable enough and set seeds for what should be a great blowoff down the line. This week we got an overturned finish and then a flash finish all in about five minutes.

If not for the new commercial rule, I'm sure this would have been much better.

They tried to make it work and it was still decent.


I'm a fair man, and I gave Raw a chance this week. It was better than most of what I've seen from main roster WWE in recent memory, but still not enough for me to start watching every week again and the bad still outweighed the good by a decent margin.

Expect Raw matches to remain largely featured in the weekly TV roundups that I do, but I give Paul credit for making this better than usual and a step in the right direction.