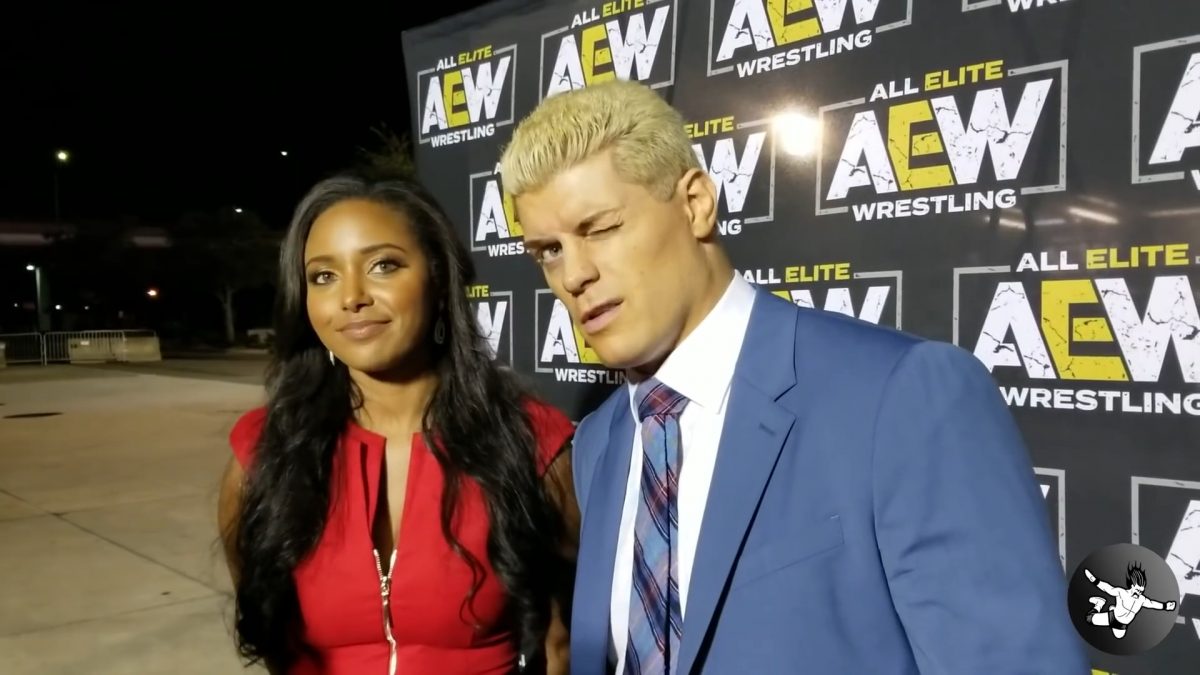 This was supposed to go up Friday, but a few factors led to me just posting it a bit early.

So, AEW isn't coming in for just one show and then ridding off into the sun.  No, they even have Fyter Fest announced as a follow up, the TV show coming in the Fall, and more. So, let's fantasy book a logical direction for the near future. Now, we'll be looking at predictions of the show itself here as well as the fallout so let's dig in.

The new stipulation that the winner will meet either Omega or Jericho to crown the first AEW Champion suggests that one of the four TBA names will win. I think the spots will be filled with Darby Allin, Jon Moxley, and two legends.

Those are possible inclusions.

Really, just look at the legends that are at Starrcast and toss a coin. I know they've spoken with DDP, Shamrock, Nash, and Raven for sure within the past few months.

I also expect KENTA to be on the show somewhere, maybe even in one of these spots.

0b.Guevara vs Kip
So, the story here from BTE is that the world hates Sammy. He's actually from the same town as I am, by the way.

This won't be a MOTYC, but it should be a fun sprint.

As far as who wins? I'll go Kip, setting up more stories for BTE, but it's a toss up.

1.SCU vs Strong Hearts
This one has a lot of potential and isn't getting enough buzz.

I see SCU winning, but I hope this really wins the OWE crew a lot of new fans. CIMA, T-Hawk, and El Lindaman are great workers and should elevate this nicely.

2.Baker vs Nyla vs Kylie
Brandi is telling all three of these girls that they are going to win. The likely blowup will occur on BTE instead of DoN, but we'll have to wait and see.

I have a feeling they'll add another women to this match last minute and she'll win.

3.Aja, Yuka, Emi vs Hikaru, Riho, Ryo
The joshi showcase looks to be a good one. With news that Riho is signed to a temporary deal, and Shida is already under AEW contract, I expect their team to win this one.

4.Best Friends vs Gueros del Cielo
This will be fun, with a nice mix of comedy thrown in. I haven't seen the setup, but I expect some type of big dive from Angelico.

Gueros del Cielo should win this one and be positioned strong off the bat.

5.AAA Tag Titles: Bucks(c) vs Lucha Bros
Likely the second best match of the night, behind Jericho/Omega, this should be a crazy spotfest. With the Page match happening in the UK, as we've already covered, and the injury angle setting up the Hangman for a cameo role on the show, this should open up more time for the rest of the contests.

That's good news, and I think it might open up even more options for this one as a result.

Now, AAA possibly ruined the outcome already when they started announcing that these two will be facing off in another rematch at their Verano de Escandalo show will feature the Bucks coming back in as champs.

They've fixed the posters, but the damage was done.

I say the Young Bucks do indeed win here, with their new move, but then drop it in AAA on June 16th.

Cody wins here, with Goldy looking good in defeat. Since this is a Cody match, and is meant to be a symbolic death of the Attitude Era, expect shenanigans and run-ins.

Possibly a touching moment after the match between the two and then Cody attacking his brother when he turns around.

7.Jericho vs OmegaThis should be the match of the night as well as a MOTYC.

I see Omega winning, and then winning the AEW Championship later down the line and the battle royal winner coming out for a face off to end the show.

Additional Thoughts:
Double or Nothing is stacked with potential, and has a lot of seeds already set via BTE and Road to Double or Nothing for future plots. I don't think they'll go too over the top with segments and storylines here, but just enough to build off of later.

FYTER FEST
The next announced AEW show is being held as part of the CEO event. The announced matches as of now are include a hardcore contest between Jebailey and Nakazawa, a singles match with Darby and Cody, and a main event with Omega and the Bucks against the Lucha Bros and PAC.

That keeps the YB and Lucha Bros feud going, and pushes the title match angle forward.

The hardcore match is a low-card angle at most.

Perhaps most intriguing is Darby and Cody set for singles action. I actually don't think they'll d much to set that up on DoN, and largely handle it on the YT shows.

I am unsure if they'll add more matches, but the last CEO event of the sort (partnered with NJPW) was a full show and there are a lot of names that they might want to use here, like Adam Page, for example.

FIGHT FOR THE FALLEN
July 13th is the date for the third AEW special, and has two announced matches. These might change, but are currently Omega vs CIMA and Brandi vs Allie.

A portion of the earning go to victims and families of victims of gun violence, by the way.

I think T-Hawk and El Lindaman might face the Bucks on the show, and the Lucha Bros will face Angelico and Evans. I have a feeling they'll start a tag tournament for to crown the first champs of the division on this show, and maybe do the same with the women's division.

If Jericho is working the show, I see him against the Casino Battle Royale Winner. I know that would set him up for two big falls in a row, but I think that's a possible plan either way.

I think this also might see the rematch of Page versus PAC.

I also think a certain straight edge superstar will appear here to set up his first AEW match in Chicago. There is a chance that Punk is actually the winner of the battle royal, but I don't currently think that's the plan.

FUTURE
They've said they want to keep the amount of championships minimal.

I think they'll have four.

The Heavyweight, Tag, and Women's Championships should be crowned during All In 2 in Chicago this August.

The TV Championship would be crowned during the first set of TNT episodes.

My prediction for the All In 2 card is as follows:
1.AEW Championship: Omega vs Moxley
2.AEW Tag Championship: Young Bucks vs Gueros del Cielo
3.AEW Women's Championship: Allie vs Britt Baker
4.KENTA vs CM Punk
5.Jericho vs Cody
6.Page vs CIMA
7.SCU vs Best Friends vs Lucha Bros vs Strong Hearts
8.Darby vs Havoc vs Janela vs Jungle Boy

I'll leave it at that for now, but there are a lot of options for AEW right now and I'm excited to see what direction they go.
Wrestling