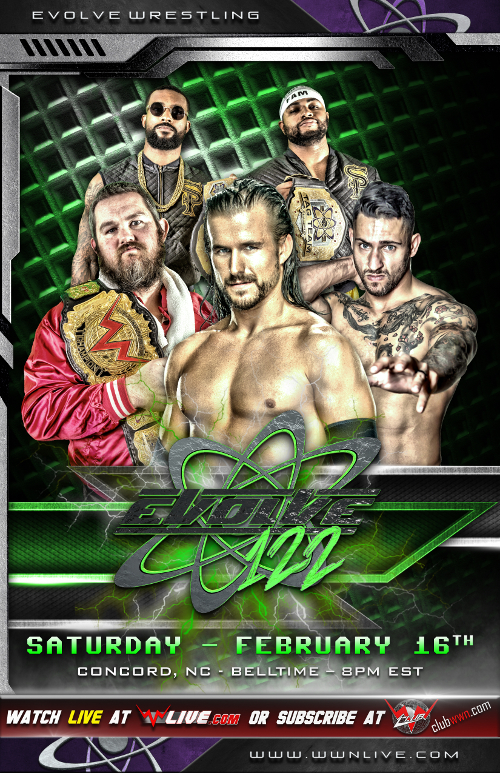 Thoughts:
EVOLVE 122 had five matches that caught my attention. That's a lot for those who follow this blog, so let's dig in and see if they lived up to my own hype.

The first pull had WWE's latest addition, DJZ, taking on Briggs in a fairly good match. Nice closing section, and a good take on the classic David and Goliath concept.

Strickland and Fox gave us one of the best of the night next in a creative clash. These two just work so well together. Shane's return to EVOLVE might be temporary, but is a good thing either way. Check this one out.

The first title match was great, with Theory and Henry working a very professional feeling contest with a nice pace mixed with solid selling. Theory is one of the best in the US when he's on his A-game, and I know that he is destined for a big spot on a major company sooner than later. Gabe seems to know it, too.

The semi saw JD Drake, who seems to have a lot of support from the backstage brass, defending against NXT's Montez Ford. At the time he was still holding one half of the EVOLVE Tag gold with Dawkins (as the Street Profits). This had a few iffy moments, but was pretty good when you consider it as a full match. Drake has a lot of potential and I think EVOLVE is the perfect place for him right now.

To close things, we had a fun main event with Cole pinning Allin. Darby did what he does best here, making Cole look fantastic. It might not have hit that next level that you'd hope, but it honestly ended up being about what I was expecting. Still, not everything needs to be a MOTYC and this was really good for what it was.

EVOLVE remains one of the best promotions that not enough people are watching. If you're reading this blog, chances are you love wrestling. Give this show, or at least the two ***3/4 matches, a shot when you can.
Red's Reviews Wrestling