What's Going On With Batista, Taker, and Goldberg? 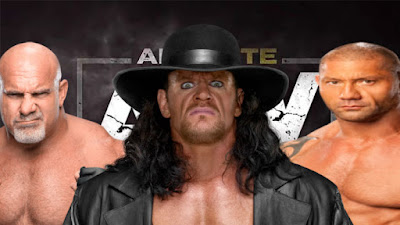 Goldberg was spotted in Vegas ahead of the Double or Nothing rally. Batista had a meeting with Jericho recently. Undertaker started taking outside gigs and is teasing something.

AEW has a roster filled with up-and-comers alongside more established names like The Elite and Jericho, but it's hard to ignore that they could use a touch more mainstream names to boost hype and get the casuals more interested. Plus, Khan is a big wrestling fan and likely loves the idea of adding one of these big stars in general.

Like it or not, that likely comes in the form of one, or more, of the names I mentioned at the start.

So, the question is...who is most likely to join AEW? All three? None of the above?

Update: Undertaker will be at Starrcast II
Wrestling