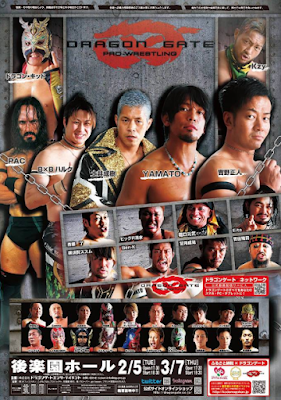 Thoughts:
Anytime I watch Dragon Gate, I know the chances are good that I'll have a good time. This was no exception. Not that long ago, Dragon Gate was actually my favorite company and I'd be lying if I said they weren't slowly getting back to that point once again. Anyway, here's the three pulls I picked from one of their recent shows.

We start with a match that will likely main event a Dragon Gate show in the near future, and the second standout performance for Skywalker this year. Both of these younger talents put in for a great match, and the outcome was actually a nice surprise that proved they really are seeing what they have in the masked talent sooner than later. I wouldn't be surprised if I see a Brave Gate victory real soon for him. Afterwards, Shun admitted that winning was a major deal but that he still had a way to go. The level of humility and respect was a nice sign. Really, both once again showed that the future is bright for Dragon Gate.

Up next we had a fun sprint with Dragon Kid, Kaito, and Jason Lee representing MaxiMuM taking on the bastards in RED, represented by Dream Gate Champ, PAC, Big R, and Eita. It was a good outing, and continued to show the tensions within the heel unit, but the finish was a bit iffy and it never really turned into anything you had to run and check out.

We finish things off with a nice threeway elimination showcase that did very well to build towards Kzy's upcoming challenge for PAC's strap. I am very excited to see the PAC's first defense and I enjoyed this main event.

In all, these three were all worth watching, but make sure to catch Shun/Ben and the three way if you are tight for time.
Red's Reviews Wrestling