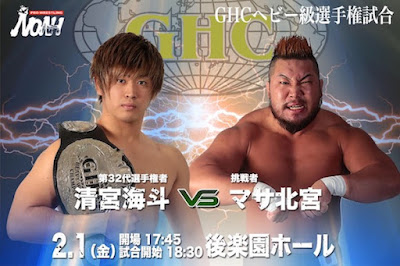 Thoughts:
Originally, I was hoping for a bit more of a slow play in the build of Kiyomiya with him taking the GHC Heavyweight strap at the end of the year. They might have pulled the trigger a bit faster than I would've, but I am still really enjoying his reign so far. After a fantastic defense against Kenou, Kaito now turned his attention to the underrated Masa Kitamiya.

For thirty minutes, they worked hard and put in for another fantastic Kaito championship defense. They stepped on the gas early, leading me to think we were in for a short sprint of a defense, but instead the pace fluctuated throughout as needed.

This felt like a true conflict and a battle of styles. Masa came off like a monster at times in comparison to the champ, playing his role well. The size of Kiyomiya and his selling promises to set up several defenses of this sort as we go forward, as many of the division's challengers are larger than him. This basically sets the champ up to be an underdog each time which should actually be of massive benefit to the reign.