Sonny is one of the most charismatic names that you might have not heard of. Kiss was featured recently as XO Lishus on Lucha Underground and was also announced as one of AEW's first talents. Check out a nice Q&A session I had a a few years ago with Kiss below.


-What made you a fan of wrestling?

To be honest, I actually played the games first. I had Nintendo 64 and one of the first games I remember playing was WCW/NWO Revenge. Eventually, one night I was in my living room and I happen to find WWF Monday Night Raw on TV and was hooked ever since.


-Who was your favorite wrestler as a kid?

My favorite wrestler as a kid... So many! Ugh, I went through phases with favorites… I was one of those people who loved baby faces and heels as well, which also allowed me to really just watch and enjoy the story that was being told with their own personas. I was really inspired by Rey Mysterio, Rob Van Dam, Dean Malenko, Eddie Guererro, Team Xtreme, Kurt Angle, and the entire golden era of women’s wrestling. I also really admire the story telling of guys like Triple H, Steve Austin, Shawn Michaels, Chris Jericho, and The Rock. It’s safe to say: I just really love wrestling and admire it in MANY forms!


-Why did you decide to start wrestling?

I decided to start wrestling in 2011, when I was 17, two really good friends of mine were starting their own promotion. At the time, I don’t even think I knew how to bump yet. I was just some 17 year old huge fan of wrestling. But they gave me an opportunity to shine and that sparked some true passion for it. However, after that one gig, I wouldn’t wrestle again for almost two whole years. That was due to being discouraged by little things, but of course, my sexuality played a huge role. I didn’t quite know how to go about it in wrestling. To fast forward, spring 2013, I returned to ring and I never looked back. It was either try and fail or never know at all—but NOW, it’s TRY and keep ON trying. The very little success that I’ve already obtained makes me very proud of who I am and I just know that I can do so much more.


-Who has been your favorite opponent so far?

My favorite opponents so far are Anthony Gangone and Steve Scott. They’re both my favorites for VERY different reasons. Gangone sort of brings out this fiery/aggressive side of me that people rarely see from me. Usually in the ring, I’m graceful, fun, flippy, and flirty, but with him, it’s a whole different dynamic. The clash up of Sonny Kiss vs. Anthony Gangone is the ultimate since we’re both very opposite. I thoroughly enjoy working with him and learning from him. I feel like I’ve grown as a wrestler from all of the matches we’ve had. Steve Scott is another one of my favorites because of the personality clash-up. Steve Scott’s selfie-persona is probably one of the best personas out there. People are drawn to him based on personality alone. He’s also one of the most passionate guys I know, alongside Rude Boy Riley. Steve likes to go above and beyond to create a masterpiece and I love that about him.


-Who is your dream opponent?

My dream opponent is any match involving anyone I’ve looked up to as a child. It’s really hard to pick only one or even tow when you’ve admired so many guys growing up. So, basically, it could be a singles, tag, mixed tag, etc. if it involves anyone that inspired me, it’s a dream come true.

I follow so many promotions on and off due to my insane schedule. From WWE to NXT to ROH to various independent promotions, I watch here and there.


-When you think of wrestling, what first comes to mind?

When I think of wrestling, I have in mind a composite of entertainment, dreams, moments, goals, drive, enjoyment, hard-work, determination, passion, talent… So much!


-What match do you consider the best of all time?

The best match of all time… Hmm, I will say that I really enjoy ANY Rey Mysterio or Eddie Guerrero match, especially with Dean Malenko (Starrcade ’97). I feel like we get an eclectic style of wrestling when we watch those three perform with ANY opponent. The best of all time, to me, is always subject to major opinion. What inspires one may not inspire/impress others. Some people like Hogan vs. Savage at Wrestlemania 5, some like Austin vs. Rock at Wrestlemania 17, etc. While those are ALL fantastic classics in my opinion, some may disagree.


-How did you get your ring name?

My ring name… well, Sonny is derived from Hassan (my real name) and Kiss was given to me by one of my trainers, Gino Caruso and his team.


-What would you tell someone who is considering a career in wrestling?

I would tell anyone who wants to consider a career in wrestling to remember this: Preparedness meets opportunity. It’s actually a motto that Trish Stratus lives by and basically means whatever you want in life, prepare for it! Give it your all!

Also, when all else fails: Be yourself! Keep a smile. Don’t step on anyone’s toes. Take criticism. Learn.


-Where do you want to be, wrestling-wise, in the near future?

I’d be lying if I said I didn’t want to be signed to a major company in the near future. I think that’s what most of us want out of this.


-What is your biggest passion outside of wrestling?

My biggest passion outside of wrestling is any type of performing—dancing, cheerleading, acting, and modeling. I want to be one of those wrestlers who can do it all.


-How have the locker rooms typically treated you?

Most of the locker rooms have treated me very nice, especially now that I’m much more comfortable with who I am. I haven’t had any problems in ANY locker rooms since my beginning months and even then they were minor problems. Most of the guys now here in the northeast are like family. The problems that DO occur aren’t spewed from hatred.


-You went viral a while back with your video involving EC3. How did that sudden burst of extra attention feel?

It was surreal. Honestly, I didn’t even WANT to do it. I felt it was just feeding the assholes and would cause a negative stir. I guess I could understand the gay community when they argue that it gives into stereotypes, but I feel like if any of them were in my shoes, they would not have disputed it all. People are going to talk regardless. Whether positive or negative, someone will always have a problem with something in this world. For example, a man could be really nice to a woman simply because he really likes her or he is just genuinely respectful, but some outsider will assume he’s trying to get in her pants when actuality he’s just being a gentleman. It’s life. People will always have a problem with something. It’s whatever. I have no regrets at all. I actually thank him a lot for that. The crowd in attendance was hot for it. We even gave it to them a second time. The fact that we got people talking means we did our job.
Interviews 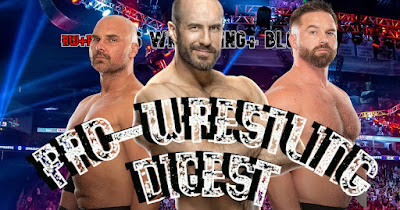 Gotta love shitty art sometimes, right!? With this I am nearly complete in my latest catch up game with AEW. This was meant to be the final portion of the stretch of reviews, but alas I went a bit overboard. It's been fun as hell watching these either way and I don't even personally care about the drama behind the scenes. Not much, at least. Like last time, I'll be using the official All Elite YouTube channel for the review process of everything outside of the Death Before Dishonor content. Note that TK held a big meeting today to cool shit. I'm told it went well. Up first, starting up with the second night of Fyter Fest, this year a four night event, and we had Lucha Bros versus Private Party. This came off as a competent tag team contest but one that cruised ahead more than it sprinted. It was also overshadowed completely by the drama with LFI. Next, House of Black bested Dark Order in a good one. After, Darby and King brawled and Sting had a micro Go/Fujita moment wi