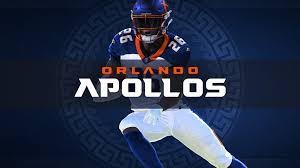 8. Atlanta (0-3)
The basement dwelling trolls of the Alliance. Atlanta might not win at all this year. I wonder if the whole franchise will even last past the opening season at this rate?

7. Memphis (0-3)
Can Mettenberger be the answer? Memphis looked decent behind the QB, but still needs a lot of help. The upcoming game versus San Diego will be a huge test.

Average at best, Salt Lake does have some sparks here and there. Don't expect to see them much higher than this spot as the season moves along, though.

San Antonio might have looked like a contender after week one, but have since fallen hard down the rankings. They were largely exposed against San Diego, and the Commanders have a huge test against the Iron coming up. Terrible timing.

4. San Diego (2-1)
The Fleet showed up big, getting revenge for their opening week failure against San Antonio by outplaying them in nearly every aspect. Behind a good, all around unit, the Fleet are becoming the best of the West.

They've been exposed since week one, but the Hotshots still seem to have a lot of the pieces they need. If they can regroup and stop making errors, they'll be a threat again. If not, expect them to fall further down the rankings.

2. Birmingham (3-0)
The ugly undefeated team is undefeated either way. Behind Trent Richardson, the Iron are a force to reckon with.

1. Orlando (3-0)
Team Spurrier rolls on, and continues to be the best in the Alliance. Their grade-A offense and solid defense will keep them in this spot until someone steps up and knocks them down a peg or two.
Other Sports