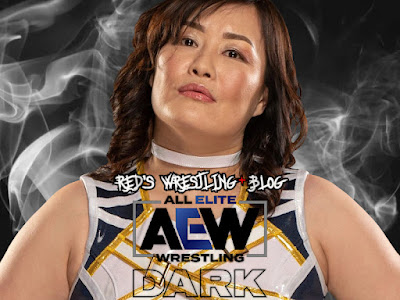 4.Men of the Year vs Fitchett, GPA NR

8.Sierra vs The Bunny NR

Dark time. Next week's should be the last before the studio format move.

Kris got a squash to start us off.
Another Punk/Darby ad runs.
Janela and Anthony was an okay short one.
Robert Anthony got more in than expected but Joey Janela put him away soon enough, regardless. Joey continued to attack after with an assist from Kayla Rossi.
Another super short, but semi-competitive one followed and saw Emi beat Luck in under 3.
The inevitable followed with Sky and Mr. Ego beating Fitchett and GPA. Taz told Excalibur that he had a decent GPA. Fitchett was pretty good in what little time he had to not die. If you hit a dropkick you take about the same bump personally as you would missing it yet they're sold very differently. Just saying.
Serpentico versus The Elite Hunter was okay but a bit off and rough around the edges. Kaz picked up the win.
LEGIT Leyla Hirsch, one of the roster members I have the highest of expectations for in regards to the future, got a squash against Onyx. Blair did the spider crawl. Came off as very boring.
2point0 got a quick one.
So did Bunny.
And Conti.
QT and Evil Uno's match was honestly better than expected, especially after a weak start and despite some interference. QT is a solid worker but requires the right opponent and layout. Uno is underrated. This felt very 90's and worked well for what it was.
Andrade added some drama to the main. Note to the production crew, but I don't need to see what La Sombra is doing every five seconds. It was athletic, as expected and if you take away the overdone stuff it would have been a very good contest overall. Still, enjoyable nonetheless even if right outside of recommendation levels.
Dark continues to go down easy.
Overall Rating: 65/100%
Red's Reviews Wrestling