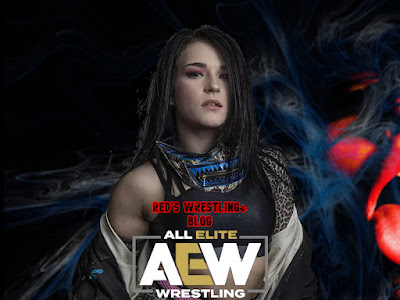 The current Mistico has left CMLL. Caristico looks like he's getting the name back.

They're airing The Meg as a lead-in. This film is such a fucking trip. Tonight's card is a bit surprising, considering half of it is Dark or Elevation level material. I have a terrible fucking cough that is lingering. It fucking sucks.

CM Punk clips run and then tonight's card is promoted.

Orange has such a perfect entrance theme. He's up against the better Hardy brother. This feud has been more enjoyable than I thought it would be. No seconds. This shit is fun. Bryce's reaction was perfect and the damn fans sold it perfectly in the opening moments. I didn't care for Matt going for the cash spots, which felt a bit too much somehow, but it's a minor nitpick. They also perhaps had a runtime that was a few minutes too much. Still, it was a pretty good match overall and a solid way to start the episode, warts and all. Oh, and the color at the end really added a lot to the match. Oh, and the Jeff call out was fun, too.

Anyway, moving on from that borderline great opener, we then moved to see Black with a promo. He offers sonny boy a way out of getting his head bashed in tonight. I wish he had debuted with just a tiny black line coming out of his eye, which would have increasingly grew in size and design each time he'd appear. Like a weird fucking demonic virus or something.

Jericho's here. He looks high again. Like, in a chill, non-issue kind of way. How the fuck isn't his song platinum. He's out to be depressed and somehow still brag because it's Y2J, after all. He wants to beat MJF off or something. He threatens to keep attacking forever until he gets to do it. He's going to propose. He asks for one more chance. Says if he can't do it, he should leave AEW. A dude in the crowd did a weird ass wave dance hybrid. Imagine if Jericho actually fails at All Out and then appears in WWE after or something. I don't think it'd happen, but I know how much Vince wants to get a hit against them. MJF came out, said his nipples were sore, but agreed to give him another go.

Chris is signed for a few more months either way. Won't be leaving.

Cheap plug, but I have a political themed book coming out next month. Please consider pre-ordering HERE. I think you'll like it.

Varsity Blonds backstage promo spot as a lead-in for the next one. I wish the forbidden door deal would give us a huge G1 style tournament, by the way. One for tag teams and the women's division, too. The Elite came out on the ramp to watch. A win here for the new team would be big. If you care, Penta and Fenix re-signed recently. They reportedly still refuse to sign more than 1-year deals at a time, but they're happy from what I hear. We go PIP for the first time. This one is a builder. The Varsity Blonds are pretty damn good. The Lucha Bros are elite class. Penta and Fenix will challenge Jungle and Lucha. Nice. The drama in post was great. The tag division is awesome.

The Andrade vs PAC match is promoted. The ROH door opens soon. More of the card is promoted, as well.

Hayter time. A fan promoting getting vaxxed is in the crowd. Remember people, if the thing didn't work, the elite wouldn't have ran to get it. Those Red Velvet dives are sick thuds. They say we're going PIP but the commercials don't start for a while. A Rampage ad cuts the PIP away, then they air a preview of NHL returning. I'm so happy that I don't mind. Then a mobile ad runs and I'm annoyed. Then two detergent ones. Anyway, I like that they air the Dark results on the bottom. It feels like a nice touch. Hayter, who was already pretty good, feels like she's gotten better. Velvet is winning me over here tonight. As I type that, she botched a standing moonsault. It ends moments later. Baker looks mad at the shot from earlier, which admittedly might have been stiffer than intended. Kris runs everyone off, including Britt. They're selling All Out pretty well so far.

Dark Order backstage. Reynolds and Uno have issues. Evil Uno went too far. Tried to apologize, and yeah. Tensions. I had heard that the Kult might be a heel unit featuring some Dark Order members breaking off. I know that is very unpopular to some. Another option is to have them tease splits until Page comes back, beats Omega, and reunites the group.

Punk's up next. The Spider-Man ad looked awesome. I wish I had more time to read comics, but I'm not even caught up on all of the movies and shows.

Tony introduces Punk. I know folk that know him and they hate the dude. I don't care. I fucking love Punk. I'm stoked that he's back. The fact that in a few days he outsold the Bullet Club shirt is fucking amazing. I don't even love that design. It's 2021 and Tony S. is in a ring with CM Punk. Two dudes that had lost their passion back in the game and looking happier than ever. The moment was great. There is a magic to Punk's return so far and it's making for some compelling television. If you can't watch this live, make sure to check out this promo when it's added to YouTube. The dude is simply amazing on the mic and looks more motivated than perhaps ever before in his career. The Bryan "YES" chants were met with a tease. For the record, I covered Bryan coming before most. Covered Punk before most. Cole. Many other things. I don't mean to brag, but someone has to give me credit sometimes, right? Yeah, I know. I'll go fuck off now.

Oh, Punk called out the Mrs., too.

AEW will be beating Raw some weeks by the end of the year.

Miro's backstage promo was solid. The Kingston match should be something that makes Misawa proud.

I dig the cleverness of these Subway ads. Subtle humor.

Wait, is the Black match main eventing or is the Factory match?

Did the dude that I think made Darby's entrance video make it? Hey, production team, please don't cut to Mox's video during his entrance. Just a shot of him walking up from the back. Keep it simple there. You guys tend to rock otherwise. I know some of the folks in AEW read the site, but I doubt any of y'all do. Still.

The Wingmen are being sold as jobbers it feels. They didn't sell the dynamic between JD and Darby that I expected. What's the odds that we get Miro and/or Punk after this one?

The racist skeleton is in a movie again.

The other day I realized wingmen is a reference to birds. I saw like four birds help one get laid. He pumped for like two seconds and that was it. I love nature documentaries.

The match is a bit too off the rails for my taste. It felt very house show. Sting randomly brawled even after the bell AND before and technically a DQ should have been called. Garcia attacked after. Have Punk align with the heels. He's too damn good as a heel. Wait a few weeks, though. Have Bryan come in as the big face counterpart to Punk.

The women's Casino Battle Royale is promoted. Conti is in it. I'm torn on the card placement. Those streams do tend to get more eyes, legally at least, than the main card. Tay and Bunny shared a moment.

Kenny time. Commercial time, actually. Dax tells us his partner's hand isn't working properly. They're getting a rematch. A recent tweet of their catchphrase and some rumors have some fans spreading rumors.

Christian interrupts Kenny. The clip from Road to airs and he calls Don a carny piece of shit. He makes an interesting statement, the two sides share a bunch of words. Drama. Soap style drama. Not my cup of tea, but the rematch is going to rock. Kaz runs off The Elite.

Mox backstage promotes his match. Kojima is his opponent. I had heard Ishii. I like Kojima, but I am a bit underwhelmed.

The Factory versus the Gun Club is up. I don't care about this one really at all. It was pretty basic and had a distraction angle finish. I really don't care much for this rivalry.

Dan Lambert is backstage with Sky and Page once again sounds like everyone's alcoholic uncle.

Hobbs vs Cage. Orange vs Evans. FTR vs Sanana, Ortiz. Jericho will chat with JR. Tony with MJF. That's next Wednesday.

Why the fuck is Brock/Black main eventing? Surely we're getting a debut or a big moment. Something, because this should not be main eventing otherwise. Black's entrance is magic.

Brock Anderson and his dad are up as is perhaps a touch of nepotism. Black dominates after a tiny green spark. Baptism in fire. It was a squash. After, Elder Anderson blocked a Black Mass which came off funny, but he just kicked him in the balls first and then his head off. Lee Johnson then walked him off.

They didn't stick the landing this week.

This week's episode had some really good shit.  I liked the first two enough to recommend them and the Hayter match was good. Punk's promo and a lot of the other segments were decent at worse. Tbe second half was a lot more basic in execution and I have no fucking idea why they didn't at least try to even things up a bit more. I also fear that they didn't do enough to keep some of these new eyes they might have otherwise hooked. Maybe I'm overstating something that is minor.

Did you know young folk in car accidents that need a vent for a week or two are dying because anti-vax dips that have a lower chance at survival once on the air are taking them up?

Anyway, overall it was good. Mileage may vary, but it was a step back from what it should've been for sure and I have a lot more nitpicks than usual.

update throughout the night as you'd like or whatever