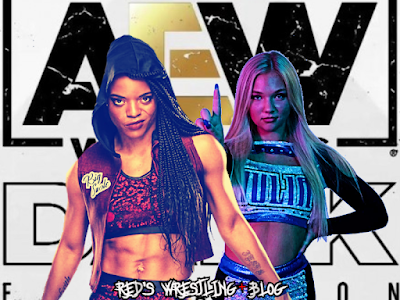 Matches:
Thoughts:
Daniel Garcia continues to give off major Benoit vibes as he got a quick win to kick off Elevation this week.
Up next, HFO's Jora Johl faced off against a man in a fanny pack. The dude could be decent.
Emi Sakura is officially all elite as she has moved to the United States. She brought Lulu Pencil with her because she loves us. The commentary on this was both one of the reasons I enjoy watching Elevation and why I don't. Paradoxical shit, I suppose. The match was decent for what it was and lasted about 4 minutes.
Hart and Big Swole took on Nyla and Diamante next in the next chapter for one of the YouTube ongoings. The Giant wanted a replay but could not get one. Now he's sad. I really wish they would have done something with a women's tag division after that tournament last year. Good stuff, honestly. They made the six minutes work. Better than expected.
Matt bragged about Jora to Jora next backstage. It's announced that AEW will be on EUROSPOTS. Matt is coming to India soon. It was pretty funny shit.
A very dramatic CM Punk package aired. Well done.
The rising star, Dante Martin, got a quick V next. Not much to say here really other than AEW perhaps has the best roster in wrestling history. Top five for sure. Oh, and Dante Fucking Martin is testing out finishers still.
Hey, the super friendly Laynie is up next against Thunder Rosa. It didn't last long.
Smart Mark put over That Bitch.
Cage and Bowens sadly didn't get a lot of time because they are trying to get Brian a quick win as he continues against Team Taz. It was okay for what it was. Hobbs and Cage shared a moment after when Hook distracted Cage. Ricky mocked the former champ.
Reckless is tiny. She ate a falcons arrow and didn't get up. No one gets up from that.
Sammy and Fuego vlogged in a victory in the episode's main event. Fuego del Sol looked motivated for sure. He got an early spark and then played the beatdown boy for a while to set up hot tag Sammy G. This was good stuff honestly and I'd like a rematch, even. Chaos Project has won me over and Sammy + FdS is a fun duo of course, too.
A perfectly acceptable hour of wrestling.
Overall Rating: 65/100%
Red's Reviews Wrestling