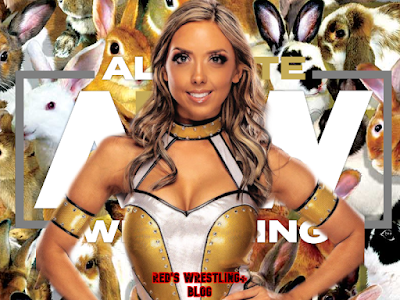 I was hoping to post a preview of this one earlier today, but time didn't allow. Shit happens and, now that the family is largely over this shitty virus that tried to fuck us all, I have even less time yet again especially as I play catch up with things I procrastinated on.

They started us off with a look at Rampage: The First Dance and the epic Punk arrival and promote his All Out match.

Paul, Eddie, and Tony then introduced us to the latest edition of Elevation.

Bowens, using The Acclaimed music and being called half of the team by Tony suggests some reports of his partner's situation being pretty iffy might have been overstated. Being put up against Dante Martin had a lot of potential in my opinion. Two dudes that are currently without their partners yet are doing great stuff, especially Dante. They went David/Goliath here for the first half and then they sped up for a bit more 50/50 working down the stretch. Bowens came off as the super athletic quality worker that he's turning into quickly and Dante as the resilient superhero. The finish felt a bit off, but I really enjoyed this either way. Good shit.

Did they bring the wrong stuff to this show? I thought they had different shit for Elevation. Maybe it's just the screen mainly and I'm just wrong. Whatever.

Swole and Hart called out Diamante and a mystery partner to a tag match before the Varsity Blonds got their record pad V ahead of their eliminator tournament match. The match was a bit more even than expected, with the jobber duo getting in decent offense, but the ending was inevitable. Old school in tone and solid overall.

Diamante teased a certain beast would be her partner for that match teased above.

Chuck Taylor was super motivated next and even danced like a bowl full of melted marshmallow while Eddie gave lessons to The Giant. It was a clever, little crowd-pleaser six-man and a good way to keep the show rolling. The energy alone made it worth a watch but the entire thing was honestly better than expected and I already had decent expectations.

Matt came out after and promised to DELETE Orange. The Best Friends hugged. Good shit.

TAY CONTI TIME! Promise's mouth guard made her look like a duck. Ace was politically called a dick during this on commentary. Basically an ES, but it's always fun to see Conti work.

Colt, Uno, and 5 versus Penta, Fenix, and PAC. This card is pretty damn stacked and it's why I tuned in tonight. Last I heard, the latest suggests that Varsity Blonds actually might win the tournament. They were involving them and The Acclaimed in a ratings feud but the whole Caster thing changed shit. They might have fixed it by doing the tournament to crown them as #1 contenders. Andrade and crew joined at the start and sat in the crowd. The Giant seemed to say, "come on" super often but never where to do so. I in no way apologize. Death Triangle eventually pulled ahead in another good one and then the civil war teases followed.

Elevation this week was far from perfect, but still managed to be a pretty damn good hour of television. Give it a spin.