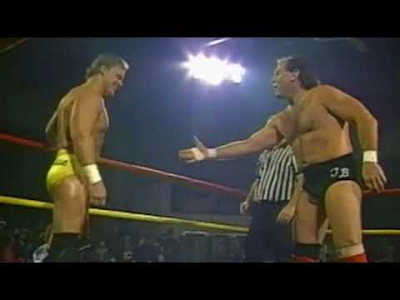 Note that I skipped 97 other than watching Raven's promo, which was enjoyable for what it was. It saw Raven critique Richards to Joey in front of the ECW crowd in his poetic stylings to be interrupted by Dreamer. It also saw Richards announce that he brought in Hotbody and Stetson to help.

Dreamer returned, the goons attacked, Dreamer kept getting past them and into the face of Raven, though. Raven didn't react several times but eventually snapped and the four men were involved in a big brawl that went to the back to end the segment.

It was good shit.

This was from 98, though, and saw Shane Douglas defend the ECW Heavyweight Championship against Tully. It started hot, stayed decent throughout, and had Shane win out of nowhere. They kept it sub-10 which was a good move and it honestly worked for what it was and considering who was involved.

Not much to complain about.

I said in my last post that I was higher on The Franchise right now than ever before and I give him props here. Again, it was a fairly basic match, but it was solid and he played his role just fine.

Still, skip it unless you are doing the same thing I am.