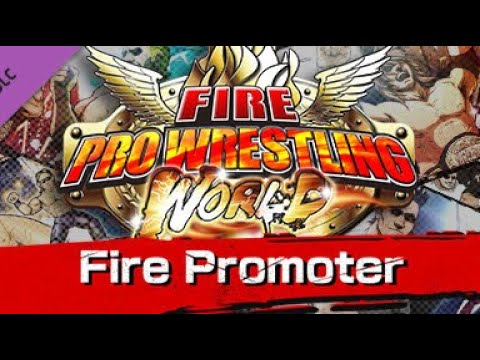 I started the second year by taking some sponsorship deals. JumboMart is my main with Lit Cola, Prince Pepperoni, and King's Play as subs. This will bring in about $122k a month.

I reloaded on snacks and produced my first set of action figures. I also tried and failed to sign Jamie Wilson.

Anyway, time for the anniversary show. Despite how it might seem, I actually follow things pretty closely. Take a look at the card/results...

Wolf Spirit Anniversary Show
This is part of the main faction warfare angle of WSW.
1.Noble(Houston,Bailey) b 666(Vuelo del Diablo,Henry)- 68%

Two of the biggest stars in WSW take each other for a shot later at the WSW HW Title.
2.WSW HW Title #1 Contender: Young b Koichiro- 97%

These two have had three previous singles matches, all top shelf and violent. Robinson leads 2-1 coming into this one.
3.DFW HW Title #1 Contender: Robinson b Walker- 98%(bloody and violent, once again!)

The Junior Tag belts are on the line. If someone pins Collins, they earn a title shot at her belt.
4.WSW Jr Tag Titles: 666(Brian,Bullock)(c) b FLASH(Collins,Stewart)-79% (Brian pinned Collins)

Anderson pinned RDM in the 6-Man decision match to earn this shot!
5.DFW HW Title: RDM(c) b Anderson- 100% (RDM had an awesome run to the top and has continued to be a guy that comes from behind in big matches. That was true once more here.)

They've fought many times, including in the main event of the first show, but this one has a bonus stipulation. If Williams fails once again, 666 must face Noble in a loser must disband contest.
6.WSW HW Title: Howard(c) b Williams -88 % (Williams used weapons and dirty tricks but failed in the end)

This time, I ran the American rural Large Hall, put tickets at $10 and ran a social media ad. I pulled in 27,217 fans out of 30k available and had an 88.3 rating. It was considered a great success and flawless.

Koichiro was injured, and set to be hospitalized for two months.

We have clear challengers set for the top two titles as well as the Junior strap, and a huge losing unit must disband match now set.

I signed Jamie this time around. I also ran out of merch and went ahead and produced a bit of everything this time. I also upped the pay of a few talents that the personal advice section suggested to me. It warned me that talents might leave or sign if they become surly, but I see no signs of that...Koichiro has a "C" in trust, but everyone else is "A" or "S".

I also upgraded a lot of the gym and brokered a deal with DFW.

Henry was dropped from 666. Houston, upset with the stipulation set by Howard, left Noble. Dickson, an honorary member of HD left. They join Jamie as unaffiliated talents.

Note that Dickson, when on loan to ACE a few months back won the promotion's tag belts with their...ace, apparently (Charlie Aria, the only title holder other than Dickson in the promotion).

Wolf Spirit IX:
1.ACE Tag Titles: FLASH(Collins,Stewart) b Arai,Dickson(c)-70% (roll up victory)
2.DFW Tag Titles: HybriDeath(RDM,Young) b Morris,Gibson(c)- 74% (roll up here, too)
3.Houston b Vuelo del Diablo- 91%
4.Wilson b Henry- 100%
5.Losing Unit Disbands, Elimination: Noble(Howard,Robinson,Anderson,Bailey) b 666(Williams,Walker,Bullock,Brian)- 83%
It took around 35 minutes to get the first elimination. Steel Soul took out the Convict in that fall. Night of Despair took out Robinson. Howard took out Despair.  Mr USA took out Walker. Steel Soul took out Williams. 46 minute match with Noble only losing one member to elimination!

And, with that, 666 was done. The last remnants being Bullock and Brian holding the Jr Tag belts.

I had to stock back up on a lot of merch.

In a bold move, I also spent a fortune signing Fuji Akatsuki. He has decent popularity but, more importantly, SWA (the biggest wrestling promotion in Fire Promoter, had made him their top champion. That's right, I am ranked 13th overall in the Fire Promoter universe but hold the top belt ransom of the number 1. If I can't get his trust level up, I'll have the belt trade hands very soon.

Note that I tried to book Arai back to take the ACE HW belt too but he declined this time to perform.
Video Games Wolf Spirit (FPWW) Wrestling