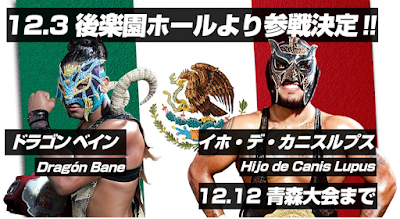 Thoughts:
The Starting Over tour has provided some fun gems so far, including a true MOTYC and a fantastic title defense. Neither of these really hit recommendation levels, yet I still walked away happy with what they were.

The IWRG showcase was fun, with the brothers basically working a general lucha match getting their shit in in quick order. They are both capable of much more, but that's not really what they were going for and it still should have been enough to win over fans and the brass.

The other saw the ageless junior and the young ace work a good, competent exhibition. NOAH has picked Kaito as their Kento, a spot I still think was better for Kenou, but Kaito is an amazing talent either way and has done great with his role. This was just a little filler spot match, and a good one at that.

Neither are really must-see, but there are worst ways to spend 20 minutes so do as you will.
Red's Reviews Wrestling