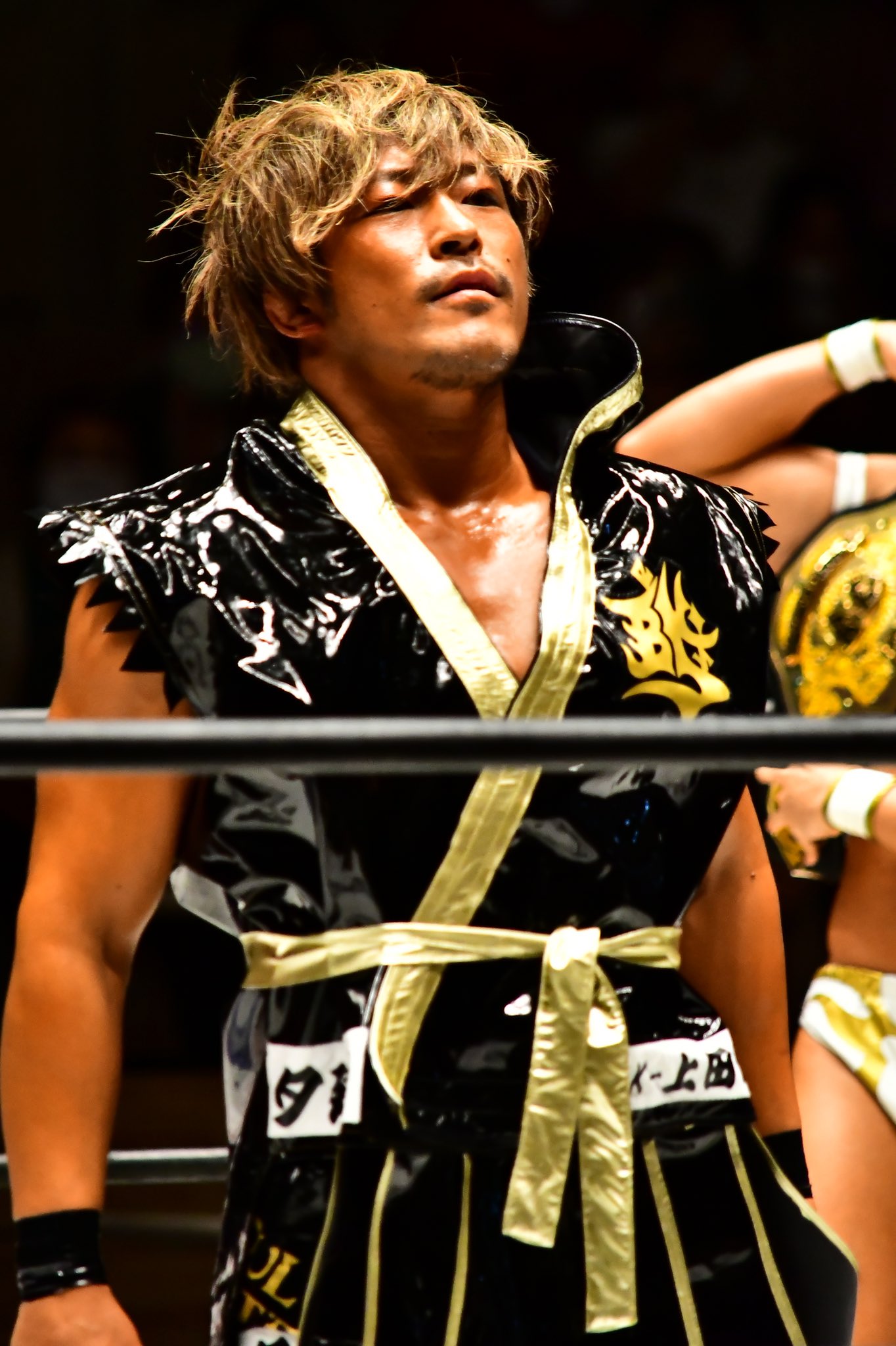 Week of 09/22-09/30
I'm including a few extra days here so that I don't have a two day, week 5 post. Note that I have officially navigated the stressful weekend (that included  a cross-country move and a birthday), so the blog should resume to (mostly) normal going forward. Oh, and the first episode of AEW Dynamite should get a review post tomorrow morning but after that will be included in the roundups.

THIS WEEK'S ROUNDUP MVP: Ben-K
The Open the Dream Gate Champion won his first defense on this week's Cutting Edge, going over strong against former champ, YAMATO. His reign is promising to be one of the most important in Dragon Gate history and this week, he was a clear TV MVP.

TV MATCHES OF THE WEEK
AAA this week began coverage of TripleMania, which I've already reviewed here. If you missed that show, consider checking it out. Also, CMLL's biggest show of the year was on Friday (and uploaded here later), but I'll be posting my thoughts/ratings on that one later.


1.#1 Cont, Elimination: Ricochet vs Mysterio vs Roode vs Nakamura vs Styles ***1/2
WWE RAW
Very fun cluster action here and Mysterio winning was a fun sight. WWE tends to do these multiman matches better than most. See, I can be positive about Vince's empire.

2.Humberto vs Angel ***1/4
WWE 205Live
Good, but honestly this was lacking a bit and the finish came off a bit weak. There's a better match here, but I have no idea if they'll get another chance to show it with the giant question mark casting a shadow over the brand.

3.Oney, Burch vs Gulak, Nese ***1/2
WWE 205Live
Another borderline great 205 match with the right team winning. Oney and Burch are one of the most underrated pairs in wrestling.

4.Lifeblood vs Villain Enterprises ***1/2
ROH TV
Lifeblood and VE continue to be the core focus of ROH's new TV format (which no one seems to like). The catch spot with Bandido/Brody was iffy as hell and there were a few minor issues mixed in. That said, this was still very enjoyable and another entertaining chapter in the rivalry.

5.#1 Cont, Street Fight: Riddle vs Dain ***1/2
WWE NXT
I dig the way they ended the USA Era debut of NXT and am glad they followed up quickly with the actual match. It's the right kind of chaos they should aim for right now with the Wednesday Night Wars starting up and looking at the card for tonight's show (10/2), I see they're aiming high. Smart move. This was very fun, by the way, so check it out if you missed out.

6.Open the Dream Gate Title: Ben-K(c) vs YAMATO ****
Dragon Gate Cutting Edge
This was heavily clipped, taking a 28 minute match down to around 15. They did so in a way that didn't make it look bad, though, and instead came off as just trimmed out fat. With how chaotic this week has been, I actually appreciated that. I've been looking forward to this one and it paid off. Ben-K's needs to be treated correct and they did perfectly here, having him go over very strongly against YAMATO. I loved it and encourage you to watch it ASAP. Long Live Ben-K!

7.DEFY Title: Artemis(c) vs Sydal ***
PCW ULTRA MUTINY
I love that the episode starts with a DEFY defense that involves Sydal. With a bit more focus, Mutiny could easily be one of the best weekly shows, by the way. I really hope you guys and gals aren't sleeping on this program. This had several fun moments and was enjoyable enough but I also think it stayed in second gear a bit too long. Skip it but know it was far from bad if you're interested in catching it.

8.PCW ULTRAWoman Title: Tessa(c) vs Sumie ***1/4
PCW ULTRA MUTINY
We've finally arrived at the title change. I still wish we would have gotten a much longer run with Tessa, but perhaps Sumie can give us something fun. She's a good worker and her WOH reign was a disappointment largely because of ROH, not because of her. This was a good start and a fairly good match. The flash pin sets an interesting tone. Hopefully we'll get a rematch soon.

9. WWE US Title: Styles(c) vs Alexander ***1/2
WWE RAW
We close with Styles defending against Cedric. Very good contest full of back and forth action and teases at a new champ. Worth checking out.

FREE MATCH UPLOADS
1.Takeshita vs ASUKA vs Hirata ***
DDT
Entertaining three-way with some comedy blended in. Not required viewing, but a fun enough way to kill ten minutes or so and I love that ASUKA picked up the V.

2.ALL OUT vs DAMNATION vs DISASTER BOX vs Jiro, MAO ***1/2
DDT
Good DDT sampler cluster, showcasing everyone involved nicely enough. If you've never watched the promotion before, watch this as an introduction match. If you have watched before, still consider it.

OTHER
1.Being the Elite Thoughts
Those shirts are fucking awful, though that's obviously the point. SCU unboxing videos should be a weekly thing, complete with the laughing tracks. Private Party's segment had some good humor and even the O left a comment. You get a Private Party shirt, everybody gets a Private Party shirt! Up next, the Bucks are told by Cutler that they've lost their edge. This week's BTEmailbag featured Omega again, this time dropping an "apology". I loved it and found the entire thing a perfect way to end the episode. Kenny Forever!

2.Road to AEW on TNT Thoughts
The personal touches and general quality of these Road to episodes have all been top notch. I love Cutler getting the focus here for the first section and how they've been trying to make every single match come off as important. Kenny chatting about the women's division and the extra build to the title match between Nyla and Riho was very good, too. These episodes actually remind me a lot of ONE's segments. Conrad gives his picks and then Cody cuts an awesome promo on Jericho to close the installment. Great episode.

3.WRESTLE-1 TV Thoughts
It's 6th Anniversary Tour time on W1 TV and they've brought a loaded card. Starting with CIMA and El Lindaman versus Andy Wu and MAZADA says everything you need to know about how serious they're taking the show. The Strong Hearts picking up a dickish style victory gives me hope that they're not going anywhere for a long time. This was cemented with the next match, seeing Strong Hearts members T-Hawk, Irie, and Seiki knocking off Inaba, Pegaso, and Koji in highly entertaining fashion. Match three looked very skippable so I won't even bother writing any further on it.  Up next, Rene Dupree, Kuma, and Arai beat Kaz, Kondo, and Soya. I am not a big fan of Dupree being involved with W1 right now but hopefully it's just for a short run. The 9/23 action ended with two title defenses. Up first, the Cruiserweight strap was on the line with Pantera being challenged by Tonsho. He's my favorite champ in the promotion right now and this looked very good. Next, the Tag belts were on the line with champs, Kodama and Ashino taking on Kono and Alejandro. All of the encounters came off strong here and the right team won. In all, this was one of the best episodes of the year. Check it out.
Red's Reviews Wrestling