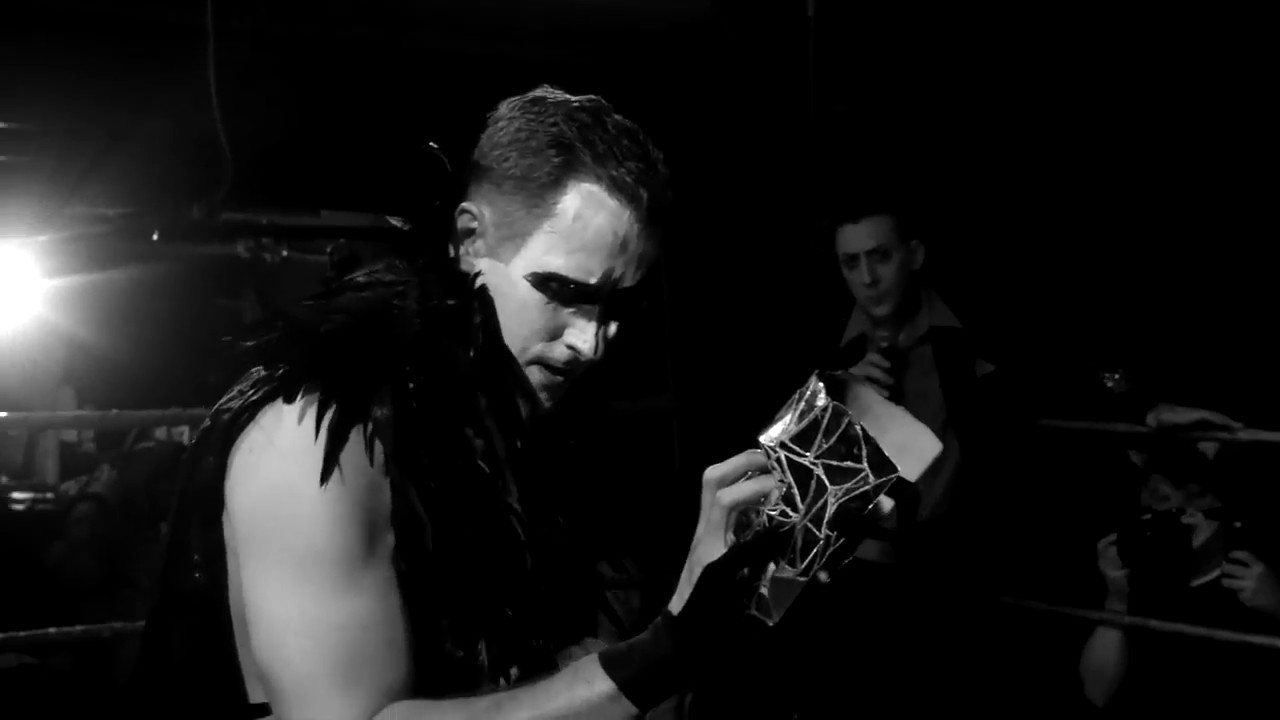 Week of 09/08-09/14
This week marks the official start to the format change up for these posts. Basically, if it's not from a special event, it's likely you'll find it here.

THIS WEEK'S ROUNDUP MVP: CARA NOIR
This title will go to whomever comes off as the most impressive this week (from the matches listed not from specials). That said, Cara Noir was one half of the best contest of this week's roundup. He might have lost, but his charisma and general work once again showed me that he is positioned for a major breakout. Watch the match below and let me know if you agree.

TV MATCHES OF THE WEEK
This is where weekly television contests will now pop up, obviously.

1.Golden Magic, Lady Shani vs La Hiedra, Villano III Jr ***1/4
AAA Worldwide
I am still waiting to see what they do with Golden Magic now, especially since they (seemingly) randomly decided to make him the next Octagon Jr despite just adding him to Jinetes to replace Laredo. AAA makes no sense some times. This tag match was enjoyable and Villano III Jr came off like a star during much of it. The finish and final few minutes in general dragged it down a tad, though.

Largely enjoyable, but this just didn't feel as complete as I'd hope for and some of the shots landed at half strength. Still, this was to crown the inaugural SMASH Women's Champ and I'm all for the outcome.

3.SMASH Title: Bennett(c) vs Garcia ***1/4
SMASH Wrestling
A nice main event just outside of recommendable. The overbooked nature is the main reason for this so your mileage may vary depending on how circus-y you enjoy your wrestling to be.

4.Mysterio vs Gran Metalik ***
WWE Raw
Nothing major, but a fun first encounter between these two great lucha talents. Funny enough, this was WWE doing what they pretend to never do...counter program. In this case, it was a counter to AAA's MSG show. I have no idea what the plan for Rey in right now, but it would have been nice to see Gran Metalik take the win.

5.Lucha House Party, Humberto vs Gulak, Nese, Ariya ***1/2
WWE 205Live
Long era Smackdown style mixup here, with a tag turning into a six-man. As expected, this was a very good spotfest showcasing everyone rather well. With the news that 205 might get phased out, I am both happy for the talents for getting a better spotlight to expose their talents and saddened because 205 is typically very good.

This was the first time I've ever seen content from this new company but it was largely enjoyable and a nice enough introduction to the brand.

7.Hammerstone vs Go ***1/2
MLW Fusion
This one if from the NOAH N-1. Props to both parties for making this happen. I love the idea of NOAH content appearing on Fusion and I actually hope that MLW uses the partnership more than Impact does. This was pretty fun and featured a surprise victor. It makes sense, though. Check out the blog for more coverage and match reviews from the tournament, by the way.

8.Elimination: Lethal, Cobb, Rush, King vs Taven, Taylor, Briscoes ***1/2
ROH TV
The new format of their series looks troubling for a few reasons but perhaps I'm being dramatic. It's worth noting that I actually hope the rumors involving Anthem are true. Anyway, this was very good action with some decent story additions. The in-fighting with Lethal and Kenny was a bit overdone and there were a few other moments that hold this back from being rated higher, but for a ROH showcase, this was solid stuff. If you haven't watched in a while, maybe this is where you should jump in.

9.PCW ULTRAWoman Title: Tessa(c) vs Taya ***1/2
PCW ULTRA MUTINY
Taking the belt off of Tessa so soon after the show started was a strange call but at least they're dragging it out and showing her past defenses first. This was an enjoyable main event and I'd like to give PCW Ultra credit because this series has been a nice addition to the wrestling scene that not enough people are talking about.

10. Lightning: Volador Jr vs Negro Casas ***
CMLL Viernes
Volador has been 1/2 the worker he normally is more often than not. Negro is still awesome in spurts despite his old age and actually out performed Volador in every way here. Good lightning match and a solid building block for the cage match that we are all dreading.

FREE MATCH UPLOADS
These are free match uploads that caught my eye this week. Common targets will include DDT, NOAH, CHIKARA, etc. Basically, any single match upload that isn't part of a special event stream appears here. I'll only include 2019 content here, for the record. That means no classic match uploads.

1.Volgar, Callux, Merlok vs Boomer, Razerhawk, Coronado **1/2
CHIKARA PCAGG
I like the arena look here and the match was decent. That said, this is a safe skip. Coronado doing WWF impersonations was interesting.

2.DAMNATION vs BASARA-gun ***1/4
DDT
I had expected more from this than I should have, but this was still fairly good and I like the outcome.

3.Iron Man Heavymetalweight Title: Puma(c), Daisuke vs Takeshita, Akito ***1/4
DDT
Good tag action but a better finish would have been preferred. I do know that Puma and Akito had a singles match after with Puma King regaining the title and I think if that had been included here that the experience would have been better.

4.Treasure Hunter Tournament Final: Dickinson vs Stratlander ***
Beyond
Seeing this pop up reminded me of the infamous Dickinson/Kimber match from a few years ago and Chris using the curb stomp a few times reminded me of Super Dragon and Candice. Now, one night tournaments can be tricky because the talent can get gassed by the finals and admittedly that seemed to have a toll on this one. Good match but not anywhere near the level of those two contests I mentioned nor to the level that I'd expect from these two.

5.Cara Noir vs Robinson ***3/4
Riptide
Cara Noir is heating up fast it seems and could be a big name within the next year or so. Paul Robinson has had a better year in 2019 than expected, too. I absolutely love the cinematic style of Riptide, by the way. This was fucking great stuff with both working hard and making for a memorable experience. Check it out!

6.HOG Tag Titles: Lucha Bros(c) vs Evans, Pagano ***
MDA
I expected a spectacle and that's what I got. Penta splashed a toddler for fuck's sake.Evans shaking in scary fashion was either that awesome selling he is known for or he was sincerely rocked bu the finish. Not must-see, but a good circus show.

7.Dragon Bane vs Aeroboy ***1/4
MDA
A high risk affair that never fully came together. I feel like a broken record at this point but a lot of stuff failed to truly hit recommendation levels and this is another example. They came close here, at least, and it was fairly good for what it was.

8.Aldis, Soul Burners vs Storm, Starks, Avalon ***
NWA
Good stuff overall. Avalon picked up the win with a flash pin, the supporting cast got to show off a tad, and it worked well enough for people wanting a taste of NWA before the new series.

9.NWA Tag Titles: Villain Enterprises(c) vs Isaacs, Latimer ***
NWA
This felt short and the shenanigan finish came off flat, ending things on a bit of a thud. That said, this was basically the end of the NWA/ROH partnership and was fairly good prior to the close. Neither of the NWA matches were must-see but if you want a primer before the new show starts you might consider checking them out.

10.T-Hawk vs The Statement ***1/2
SPW
This one's the main event from an SPW vs OWE show. The finish was a tad surprising but I guess it sets the tone for future shows and, honestly, T-Hawk far out-performed the top champ of SPW here, either way. Check it out if you want a taste of something different.

OTHER
This is where I'll place my thoughts and summaries on weekly content like BTE and W1's series.

Being the Elite #169 Thoughts
This week's installment starts with Brandon Cutler getting mocked for his dnd habits. Roll initiative. The Bucks talk about their ladder match and the aftermath. I agree that the match was one of the craziest I've ever seen. In other news, I think I want Knox to follow me around and enforce my life. The tag tournament was plugged a bit before JR plugged the Nashville gig. The latest BTEmailbag saw Kenny at his lowest. I look forward to seeing where they go with this. Luchasaurus closed things by calling out the offensive nature of Barney. Nothing major this week but entertaining as usual.

The Road to AEW All Out #2 Thoughts
Sammy gets a lot of time this week which was cool. I hope that these kinds of packages will be part of the weekly TNT series because this is something that all promotions should do yet few actually bother with. They then promoted the women's division a bit before a sitdown between Tony and Cody closed the week's episode. After the booking of Darby/Cody, I think this match could surprise people despite the obvious outcome. Let's hope!

WRESTLE-1 TV #127 Thoughts
A few highlights, a funny training clip, and a brief Pantera sitdown make up this week's very short, eight-minute episode. I love this show but this is a safe skip in direct contrast to last week's edition.
Red's Reviews Wrestling