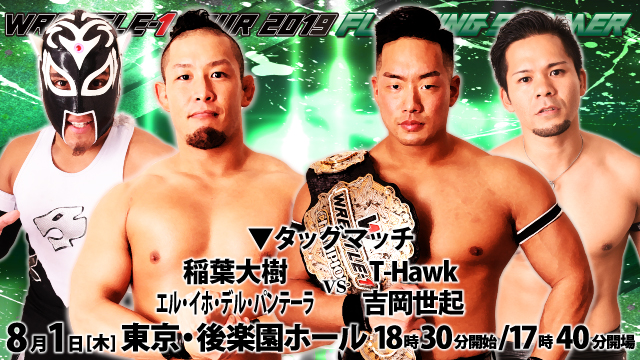 Thoughts:
There's a reason why frequent visitors to this blog might have noticed that W1 gets a lot of coverage and these two matches are a good example of why that is. Despite constantly pumping out hits, they aren't getting nearly enough attention. Still, I love their content so much that their weekly show is the only one I've been watching consistently.

The Strong Hearts match kept the T-Hawk/Inaba story moving and was another fantastic match from the OWE boys. Pantera continues to be one of my favorite roster members and Inaba is growing on me in this role.

The main event ended things on a high note. Ashino is the company ace and really needed something better to do after failing in the Grand Prix so putting the tag belts on him is a smart move. I'm not 100% sure if this is meant as an official move for Kodama to heavyweight for the record but if it's just an attempt at giving him something to do as well than I'm intrigued.  There was some circus act stuff here that held back the overall quality, but they still did enough to keep it worthwhile.

El Lindaman came out to challenge the new champs after and revealed the new Strong Hearts member (and his partner for the defense) would be Irie!!!