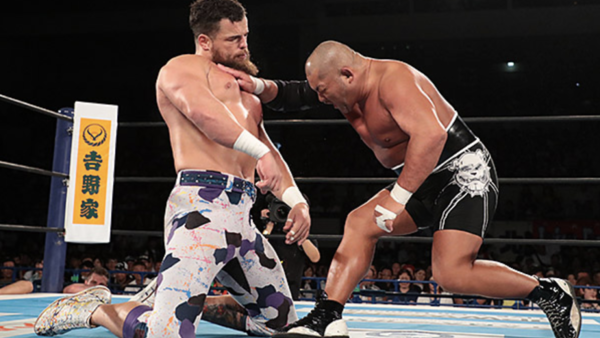 Thoughts:
This year's tournament is one of the best ever, and wrestling itself is putting out more quality content than basically ever before. Anyone who says otherwise is either stuck in the past or only watches WWE.

It's a great time to be alive.

Night eight's pulls saw Mox continue to dominate, this time making SHINGO tap out in a great battle and Naito pick up a V against the Stone Pitbull in a nice, 20-minute building affair.

Zero fucks are given by Mox.

Over on the next show, Archer continued to surpass all expectations and KENTA continued to resemble his old self. I love the monster roll Archer is playing and hope he gets some better booking going forward now. The dude might have the worst tats in the game outside of Icarus but he's proven his worth here.

The dream match main lived up to the hype. Like I said above, KENTA is starting to look more and more like his old self. He didn't get the nod over Okada, but it was a near MOTYC showcase that I hope turned enough heads to get him a shot at the belt sooner than later.

We close with three matches from the tenth night of G1 action.

My favorite of this whole collection kicked them off and, of course, it had Ishii involved. Juice is one of those under the radar guys that excels in whatever's given to him. Since leaving NXT, he's been one of the best workers that no one's talking about. I wish he was still involved with Lifeblood. Anyway, the contest was awesome and a must-see battle.

The second of the night had some interference and bs involved, but was still pretty good. I like White more than most and think he has a great spot in the promotion moving forward, so him winning here made sense. SHINGO continues to be one of the elite.

We close this time with another Mox win, this time at the expense of Naito. Them being the antithesis of each other made for a cool dynamic. Great contest with, once again, no fucks given by the artist formerly known as Dean Ambrose.

Watch all of these and keep an eye out for #4.
Red's Reviews Wrestling