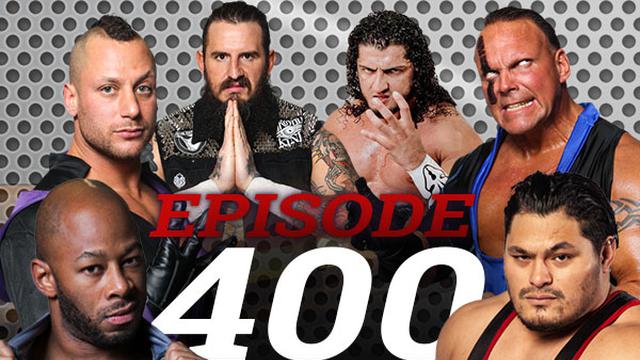 Thoughts:
Ring of Honor gave us two big title matches during this week to celebrate 400 episodes.

Congrats on the achievement! Interesting bit of info, but this is my 500th blog entry. Funny how that lined up.

The challengers in the opener were certainly an interesting grouping, but it makes sense to get your biggest stars on the episode. The match was very good, playing out exactly like you'd expect given the names. I know Villain Enterprises are on borrowed time, but they've been one of the best things in current ROH and I'm glad we're at least getting this time with them now before Marty leaves.

Some decent segments fill the gap between matches. I have little interest in a Kenny King/Lethal rivalry nor in the Bully shit. It sucks that Jay and Lifeblood are in those situations right now, but maybe it'll turn out better than I think. If not, I likely won't see it anyway given how I select matches to watch.

The main event was good, but goes to support one of my biggest fears of Taven as ROH Champion. The ending was shit and the shenanigans are going to be a problem in nearly every match . Bad booking that sucked down the quality of what had basically been a good match.

This episode is a big deal and in all it was a fun show. Yea, you see some of ROH's bigger flaws in action here, too, but not their biggest ones and you get an hour of solid entertainment to make up for any problems. Check it out, just don't expect a homerun.

Note that I'll be posting a grouped review at the end of the month with TV matches I watched.

You can watch this episode here.